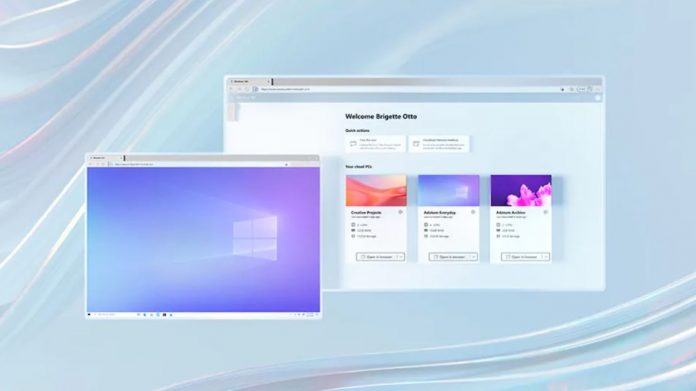 Microsoft today introduced Windows 365 , a new Cloud PC service for companies. It’s essentially a business-only solution that allows companies to provide their worker’s web-based access to a Windows PC in the cloud. As a result, the service is a simplified version of Microsoft’s existing Azure Virtual Desktop service, which eliminates the burden of setting up a cloud-based Azure Virtual Desktop environment.

The service was introduced in an official blog post by the Redmond giant. Any contemporary web browser or Microsoft’s Remote Desktop software will operate with the Windows 365 service. When it opens internationally on August 2, it will be available to businesses.

“Windows 365 takes the operating system to the Microsoft Cloud, securely streaming the full Windows experience—including all your apps, data, and settings—to your personal or corporate devices. This approach creates a fully new personal computing category, specifically for the hybrid world: the Cloud PC,” wrote Wangui McKelvey, the General Manager of Microsoft 365.

(also see: OnePlus Nord 2: Everything We Know So Far)

As you might expect, Windows 365 will allow organizations to provide their employees with remote access to a Windows 10 or Windows 11 (when it becomes available later this year) PC in the cloud. The service is being launched at a time when big corporations are transitioning to a hybrid work culture as a result of the Coronavirus epidemic. With its Cloud PC offering, Microsoft hopes to make this transition easier for businesses.

Windows 365 will be available in two editions: Business Edition and Enterprise Edition. Both are based on Microsoft’s Azure Virtual Desktop, which allows companies to build full-fledged Cloud PCs with anything from a single CPU, 2GB of RAM, and 64GB of internal storage to a high-end system with up to 8 CPUs, 32GB of RAM, and 512GB of storage.

With Windows 365, Microsoft hopes to provide cloud PC services to organizations who had previously desired to test virtualization services but were unable to do so owing to a variety of factors. Businesses will be able to quickly construct Cloud PCs and allocate them to employees using the new cloud service.

“Windows 365 is really going to make a huge difference for organizations that wanted to try virtualization for various reasons but could not — maybe it was too costly, too complex or they didn’t have the expertise in-house to do it,” further added McKelvey.

When it comes to the W 365 service’s cost, Microsoft hasn’t said anything yet. So, once the service goes online on August 2, we should anticipate the business to publish the rates for both plans. You can see the official Windows 365 marketing film embedded below.