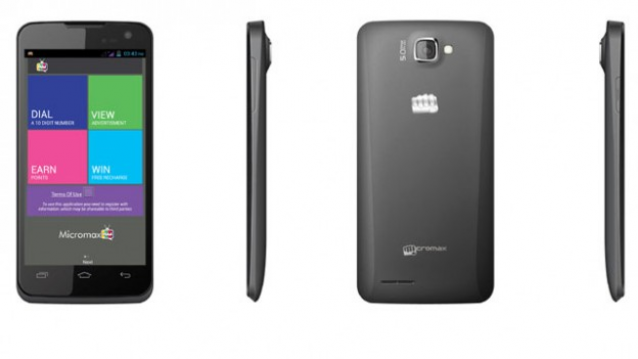 Micromax has officially launched the MAd A94, a phone that rewards users for watching advertisements. The phone is priced at Rs 8,490.

It works something like this: You can watch an ad before you dial a number and earn points, which can be converted into rupees to be credited to you post-paid or pre-paid accounts. You can also watch ads through the standalone MAd app and get rewarded for the same. Users will have to register with telecom operators to activate the service. It’s not yet clear how many points the user gets for watching an ad. Micromax says that in the future, the points could possibly be redeemed for other services besides the ones currently being offered. This feature is only available on the Micromax Mad A94 right now.

The battery is 1800 mAh, which could prove to be less than ample, if one is watching ads most of the time. You’ll find Bluetooth v4.0, Wi-Fi, and 3G connectivity and 4GB of storage onboard. That can be expanded up to 32GB with a microSD card.

The rewards for ads feature is obviously the headline maker and Micromax believes it will give brands an opportunity to stand out. Rahul Sharma, co-founder of the company believes it will “provide a high engagement communication channel for the brands to break away from the clutter.” He also said in a statement that it will help operators improve per user profitability.

The point of contention is how operators could possibly increase profitability when users are going to get their accounts credited for watching ads. Secondly, users would actually be consuming from their data plan to watch the ads, so it’s not all that rewarding getting a small amount of credit in your account. At the moment, with no clarity on these points, the MAd phone comes off as just a gimmick.