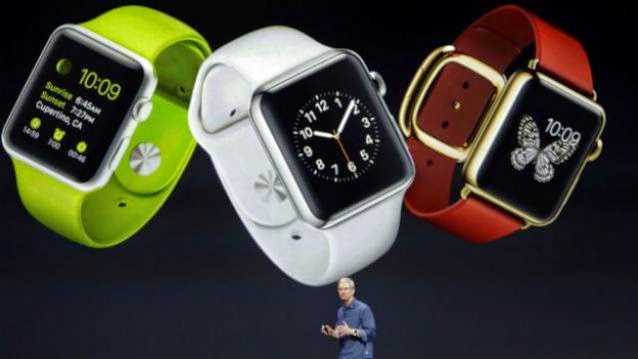 Tim Cook on stage during the launch of Apple Watch. AP

Cook had also said during the launch, “Apple Watch is the most personal device we have ever created. We set out to create the best watch in the world.”

In an interview to the Wall Street Journal, the Apple CEO said, “Innovation is alive and well at Apple. You can scream it from the rooftops.”

Even Apple’s videos during the keynote address made it clear that for the company it wasn’t about being the first to launch the watch but rather to launch one that was better than the competition. Of course this is something that is hard to determine right now given that the Apple Watch will launch in 2015.

Where Apple’s new iPhone 6 and iPhone 6 Plus is concerned, there’s also been criticism that Apple has finally given into the big screen trend, something that competitors have been offering for years now. But as Cook told USA Today, he sees this an “opportunity” to get people to “from Android to iOS.”

He also told the newspaper that the company had been working on the Apple Watch for years and had started considering bigger screen iPhones nearly four years back. In fact Wall Street Journal had reported last year, just days ahead of the iPhone 5s and iPhone 5c launch that Apple was already testing iPhone screens ranging from 4.8 inches to as high as 6 inches.

A smaller screen was argued as one of reasons for Apple’s slowing growth. In a market where phablets have come to dominate, the 4-inch iPhone was seen as too small.

But in typical Apple fashion the company has launched a bigger iPhone only once they’ve been convinced of the product, not just to pander to the market.

Apple has also introduced Apple Pay, an NFC chip based payments system on the iPhone 6 and iPhone 6 Plus. Tim Cook is convinced that it will change the five-decades old credit card system which relies on magnetic strips. One again, NFC payments were introduced earlier in Samsung smartphones as well. With Apple Pay, the company didn’t really answer all questions on security. For instance, Apple says it won’t be handing over your personal details to the merchant when you make a transaction and that for each transaction they will use a one-time pay code.

Security concerns aside, this event was clearly about Tim Cook stepping out of the shadows. For starters, you have two huge screen iPhone. Plus the Apple Watch is the first new product category launched under him and the fact that he used ‘One more thing’ (a phrase associated with the late Steve Jobs) was sign enough that this was Cook’s way to talking back to the critics. If the Apple Watch does succeed, and this success could be for version two or three as well, it will Cook’s success more so.