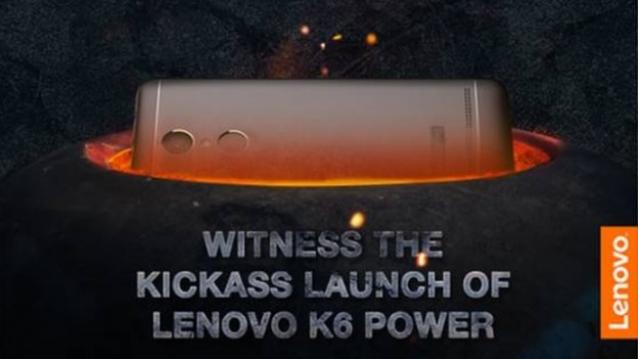 Lenovo is steadily bringing new smartphones to the Indian market. It recently launched the giant sized Phab 2 Plus loaded with AR features and just last week the company announced that it will be bringing another smartphone this week. That new smartphone is the K6 Power which is launching today.

The smartphone was first showcased along with the K6 and the K6 Note at the IFA 2016 trade show in Berlin. The USP of the smartphone is its large 4,000mAH battery in a more compact design. This is something that Xiaomi did with the Redmi 3S/3S Prime.

The smartphone runs on a 64-bit Snapdragon 430 octa-core processor with Adreno 505 GPU for graphics.

It features a 5-inch full HD (1920×1080) display, a metal unibody design and dual-SIM support. The smartphone was announced in two RAM-storage configurations- 2GB RAM/16GB storage and 3GB RAM/32GB storage. Both the variants offer memory expansion with a microSD card. Other features include a 13MP camera at the back with an LED flash, an 8MP front camera, a fingerprint scanner at the back while the connectivity options include 4G LTE, Wi-Fi, Bluetooth 4.1, and GPS.

Looking at the features and the specs, the K6 Power is definitely an attempt to topple the Xiaomi’s Redmi 3S series which was launched in India earlier this year. This means that the price range of the upcoming K6 Power will be somewhere around Rs 6,000-10,000 price range. The company has also confirmed that the smartphone will be sold exclusively through Flipkart.

The company will be announcing the smartphone today at an event in New Delhi around 2:30pm. You can watch the launch event via the live steam below.