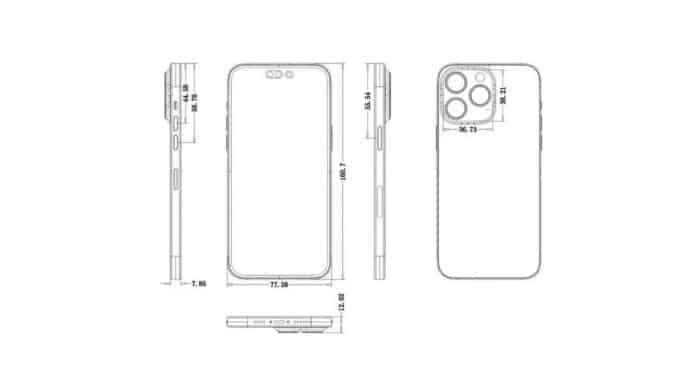 Rumours have been flying about as Apple prepares to debut the much-anticipated iPhone 14 series later this year. Analyst Jeff Pu previously speculated that the iPhone 14 Pro and 14 Pro Max might be the first iPhone models to use a 48MP main lens. Now, famous Apple analyst Ming-Chi Kuo has indicated that the greater camera bulge of the iPhone 14 Pro variants is owing to the 48MP sensor at the rear, based on newly leaked schematics. Let’s go over the specifics.

If you’ve been keeping up with the newest iPhone 14 series news, you’re probably aware that tipster Max Weinbach just published the schematics for the iPhone 14 models, which show the “hole + pill” punch-hole display at the front and bigger camera bumps at the rear.

Kuo responded to these schematics on Twitter, claiming that the greater camera bump is due to the larger 48MP sensor in the rear. The diagonal length of the 48MP image sensor will expand by 25-35%, while the height of the 48MP sensor’s 7P lens will increase by 5-10%, according to Kuo. You may see the tweet directly below.

Apple now employs the same 12MP sensor for the main lens of all iPhone devices. According to Apple’s rules for accessory makers, the camera hump on the current iPhone 13 Pro and 13 Pro Max is 3.60mm tall. However, according to the most recent schematics, the back camera bulge on the iPhone 14 Pro and 14 Pro Max would be 4.17mm tall, a huge increase.

Aside from this, the future iPhone 14 series is likely to deliver significant advancements in RAM and display. According to Ming-Chi Kuo’s report, Apple would exclusively sell its new A16 Bionic CPU with higher-end iPhone 14 models. The current A15 Bionic chipset will be used in both the basic iPhone 14 and the iPhone 14 Max. So, how do you feel about the iPhone 14 series? Please let us know in the comments section below, and stay tuned for further developments.