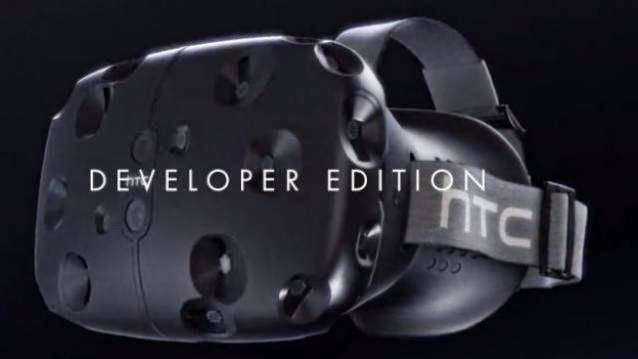 Following in the footsteps of Microsoft and Samsung, HTC is also stepping into the territory of virtual reality and has partnered with a company called Valve (a video game platform company that distributes and manages thousands of games such as Counter Strike etc) to launch its own virtual reality headset. The HTC Vive headset as it’s called will get a consumer edition by 2015 and the developer addition will launch this Spring.

According to the company, the headset has a 1,200 by 1,080 pixel screen in front of each eye, with refresh rates of 90 frames per second to display realistic images which will transport users/players into the virtual world.

It has a gyrosensor, accelerometer, and laser position sensor which combine to precisely track the rotation of a users’ head on both axes to an accuracy of 1/10th of a degree, according to HTC.
HTC’s press release notes that “Vive offers the most immersive experience of any VR package” with a “full Room Scale 360 degree solution with tracked controllers.”


According to HTC, they have combined Valve’s Steam VR tracking and input technologies with the Vive Headset. This will allow users’ physical location to be tracked (15 feet by 15 feet in the virtual world) as well. Essentially users will be able to walk in the virtual space, while the Steam’s base station will track the location.

The headset will also have Ergonomic VR game controllers in each hand to allow users “to use virtual objects and interact with the virtual world” and the position of each controller will be tracked to help developers create a range of activities and interactions. The VR controllers will be available in a pair and HTC claims they are simple to use. Users can also plug-in their headphones into the headset to get the full audio experience as well.

“Our collaboration with HTC is driven by the companies’ shared desire to produce the most compelling and complete VR experience,” said Ken Birdwell of Valve. “Delivering content creators with the Vive Developer Edition is an incredibly important milestone in our efforts to achieve that goal.”

“Vive creates an exciting opportunity for all developers and content creators, to help us bring virtual reality into the mainstream with an end-to-end solution that completely redefines how we entertain ourselves, communicate with each other, learn and, eventually, how we become more productive,” Cher Wang, HTC Chairwoman said.