HTC One Max phablet with fingerprint scanner launched at Rs. 61,490 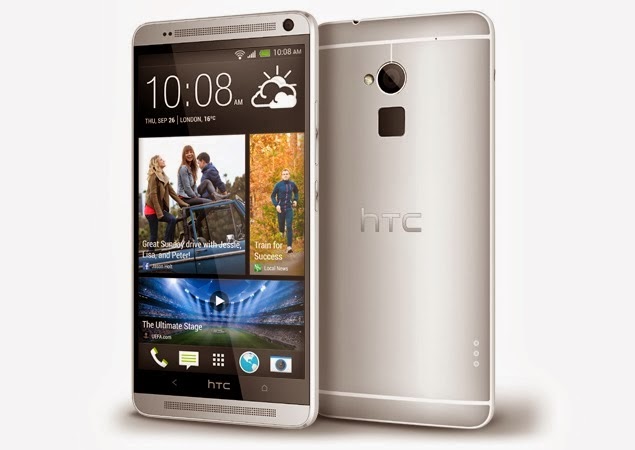 HTC has announced its latest phablet, the One Max (16GB variant) in India at an MRP of Rs. 61,490, and a best buy price of Rs. 56,490.
The Taiwanese manufacturer unveiled the One Max phablet in October this year. It runs Android 4.3 Jelly Bean out-of-the-box with HTC’s Sense 5.5 UI on top. The phablet comes with a 5.9-inch full-HD LCD display.
The HTC One Max is powered by a 1.7GHz quad-core Qualcomm Snapdragon 600 processor, coupled with 2GB of RAM. It comes with 16GB inbuilt storage with support for up to 64GB of additional external storage via microSD card. The device features HTC’s UltraPixel rear camera, while there is also a 2.1-megapixel front-facing camera onboard. It also has HTC Zoe and HTC BoomSound features, first seen on the HTC One.
Connectivity features on the HTC One Max include 3G, Wi-Fi, Bluetooth, NFC, DLNA and HTC Connect. The device also packs a 3300mAh battery which can give up to 25 hours of talktime and 585 hours of standby time for 3G networks. It measures 164.5×82.5×10.29mm and weighs 217 grams.
The HTC One Max follows the same design as that of company’s flagship smartphone, the HTC One. Notably, the all new phablet from HTC features the long-rumoured fingerprint scanner at the back which lets users log in with a swipe of fingertip. The HTC One Max is now the second device launched this year to come with a fingerprint scanner feature, after the Apple iPhone 5s. With the launch of the One Max, HTC has now launched all the three One series smartphones in India, including the One and One mini. Soon however, the Taiwanese handset maker is expected to slash smartphone costs and sell cheaper devices with aim to make the Q4 profitable, as suggested by a report suggested.
HTC also unveiled the Power Flip Case accessory, priced at Rs. 5,999, a 1,200mAh battery expansion to provide extra juice, apart from increased protection.
The company also unveiled the HTC Mini+ accessory at Rs. 7,790, which as per the company is a multi-tasking solution for taking calls and also gives instant notifications. It features a 1.5-inch OLED display with a 128×128 pixel resolution.
Another accessory announced for the HTC One Max was the Fetch keychain, at Rs. 2399. Users can press the button on the keychain, and the device activates their phones’ ringtone within 15 metres. Pairing it will give users a warning beep if they leave their smartphones behind, and a map location feature is also present.
HTC One Max users will also get 50GB free additional cloud storage space on Google Drive.