Google to shut down Gtalk on February 16, will force users to switch to Hangouts 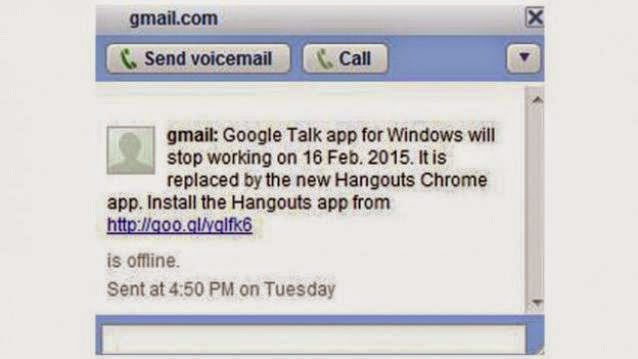 Starting February 16, users will have to move away from Google Talk and embrace Hangouts, whether they like it or not. Yes, Google is all set to force users to switch to Hangouts, as it seems to be the future for the search giant.

This isn’t surprising as Google had already made it clear as Gtalk was unavailable for download from Google. Lats year, GTalk was suddenly replaced with Hangouts and most people started finding it very confusing. Users looking to download Gtalk were redirected to Google Hangouts download page.

However, this week, Google has made it quite clear that GTalk will no longer be operational starting Feb 16.Moreover, looks like, Google wants to bind the desktop version to Chrome, forcing users to move to Chrome.Could WhatsApp churning out a web client be the reason for this?

Most users are accustomed to the familiar Gtalk interface, which is also believed to load better than Google Hangout on slow internet connections.

Though Google tried to bring everything – phone calls, sms, messaging and video conferencing – in one place, it hasn’t worked. Hangouts isn’t as popular as WhatsApp, WeChat or some other messaging apps.

Find out why Google Hangouts isn’t as popular as WhatsApp, WeChat or others.