Samsung has announced that the Galaxy S5 will be available starting April 11 in over 150 countries, but that isn’t letting one Indian retailer list the device a month ahead of time. Indian e-commerce store Saholic has the Galaxy S5 available for purchase right now, with a guaranteed delivery of the handset by March 7th. The site even mentions that users would be eligible to receive a fee of Rs.50 ($0.8) for every day the order is delayed after the claimed date of delivery. That is indeed a bold
claim, considering that most other retailers have not even started pre-ordering the handset yet. The Galaxy S5 price in India for the 16 GB variant is listed as Rs. 45,500 ($730), which is low when compared to retailer listings from the UK and Germany, which indicated a $1000 price for the handset. As you can see from the link, only Saholic is offering the device in the country.
It is likely that Samsung is looking to price the Galaxy S5 lower in India as it looks to compete with other high-end mobiles in this segment. LG has just launched the LTE version of the G2 in India for Rs. 46,000, so it is plausible that Samsung will offer the Galaxy S5 at a similar price. The Saholic listing does look legitimate, but we cannot figure out how the site can possibly deliver the Galaxy S5 a month before anyone else, and before Samsung’s official launch date for the device.
Update: Clicking on the “Buy Now” button leads to a dialog box that indicates that the device is out of stock. The listing looks like it is just a placeholder for when the device actually launches. Be that as it may, it does indicate the price that Samsung is considering for the Galaxy S5 in India. 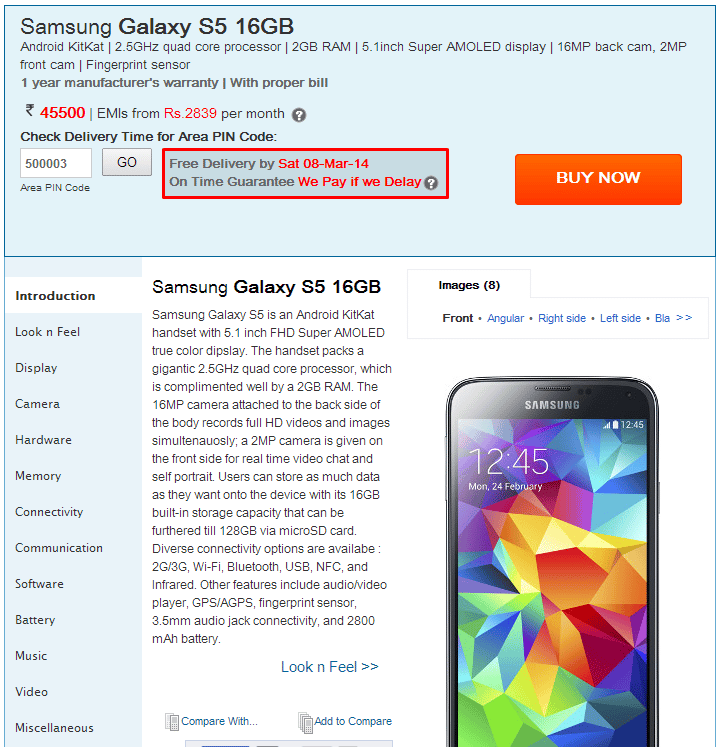