Facebook gears up for Thanksgiving, adds ‘Say Thanks’ video cards

Facebook gears up for Thanksgiving, adds ‘Say Thanks’ video cards 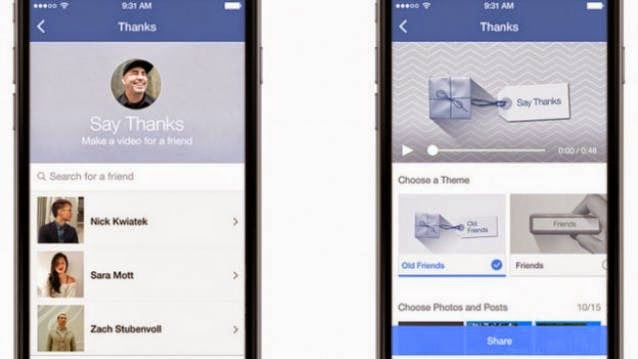 Facebook has been putting in a lot of effort in innovation, to ensure it stays at the top of the social networking circuit.

Perhaps inspired by the massive success of their ‘Look Back videos’ which we saw everyone share their personal videos on their timelines for a good six weeks or more, Facebook has added a new snappy feature that lets you thank your friends and family in a special way for Thanksgiving.

Lookback videos were a huge hit as over 200 million people across the world created and watched their Facebook Look Back videos.

Facebook has released an official statement that reads, “Today we’re excited to announce Say Thanks, an experience that lets you create personalized video cards for your friends on Facebook. Share a Say Thanks video with a close friend, your significant other, a relative, a coworker, an old friend – or anyone else in your life who you’d like to celebrate. There is no limit to how many personalized videos you can create and share.”

To get started, users have to visit facebook.com/thanks and choose a friend they want to thank. Facebook will then quickly generate a preview of the video. Users can then select a different theme and edit photos and posts that represent their friendship.

Once the video is ready, simply click share. Users can also write a personalised message before posting. The post will appear on your timeline and also tag your friend.

Facebook says the new feature will start rolling out globally today on both desktop and mobile in English, French, German, Indonesian, Italian, Portuguese, Spanish and Turkish.

Reasons Why TikTok is Banned in India