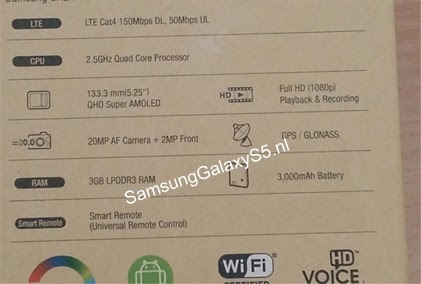 This morning we received an anonymous tipster the figure below, where it would go to the back of the box with the unannounced Samsung Galaxy S5. It is clearly seen that the packaging is made of the same material as the Galaxy S4 and Note 3, at least because of fully recyclable products. More interesting are the specifications shown on the back, which is somewhat different from the latest rumors.

CPU
What stands out is the CPU, a 2.5 GHz quad – core processor. The latest rumors suggest That two versions of the Galaxy S5 will be released. One will have the Exynos chipet 6 and the other on the Qualcomm Snapdragon 805. Given the number of cores (four), this is probably the Qualcomm version.
Display
According to the image of the Galaxy S4 successor, the device will be 133.3 millimeters long and supports a screen of 5.25 inches pounds All which correlates to previous rumors. We usefull see a qHD Super AMOLED screen type, All which would meansthat the Galaxy S5 indeed features a display with a resolution of 2,560 x 1,440 AMOLED. The pixel density (ppi) might come down to 560ppi.
Camera
The most remarkable is the camera, a 20 megapixel camera on the back. In late January, the news came out That the Samsung Galaxy S5 has a 20 mp and will be equipped with an advanced iris sensor camera. However, a rumor suggests fresher That the camera will have “only” 16 megapixels
Specs
The specifications previously listed for the Galaxy S5-including Those in the above image are as follows:
Information about the housing (aluminum / metal or plastic) and features (fingerprint scanner) are not listed.
It is unfortunate That only a portion of the box is visible. This puts it Doubts to the authenticity of this picture. On February 24, Samsung is organizing an Unpacked event, where presumably the Galaxy S5 will be announced officially.