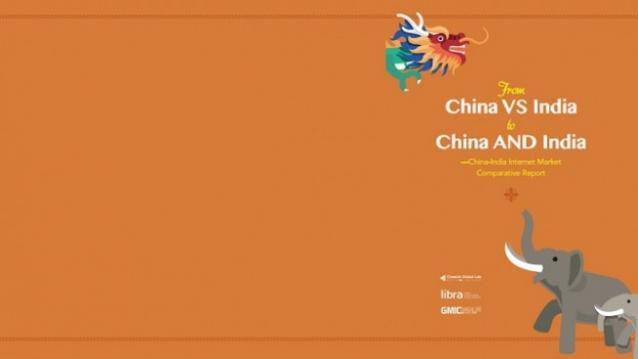 The latest China-India Internet Market Comparative Report by Cheetah Global Lab is out. According to the report, China and India are both focused on developing their internet industries. Not only are the governments of both countries actively promoting innovation and entrepreneurship, but both have put forward internet development plans—Digital India in India and Internet+ in China.

The competition between China and India in the internet industry is the narrowest. However, in 2015 India’s growth rate surpassed China’s for the first time.

India is also in the middle of a mobile startup wave. The difference between India and China is that India skipped over the PC era, so there are no locally cultivated internet giants like Alibaba, Baidu or Tencent, which means mobile internet startups don’t face as much competitive pressure as companies in China. But as a relatively open market, India’s mobile startups face comparatively fierce competition from foreign companies.

India’s recent Diwali festival is the biggest shopping season of the year for India’s largest e-commerce companies. Diwali accounts for nearly 1/3 of all annual online sales in India, similar to China’s November 11 “Singles Day” holiday. But if you compare the total amount that consumers spend on both holidays, it is clear that the gap between India and China is still quite large.

Overseas e-commerce brand Amazon has launched a fierce offensive in India. A June 2016 Nielsen survey showed that Amazon is the most well-liked e-commerce brand in India, followed by Flipkart.

India’s food delivery enterprises seem to have more globalized ambitions than Chinese companies. India’s number one app Zomato was launched in the Indian market in 2010. In 2012 it made its first foray overseas and by 2013 it have entered the Middle East, South Africa, South Asia and North America; in
Lenovo is the third largest mobile phone brand Lenovo (including Motorola) in India in terms of inventory while Xiaomi is in the top 10.

As the Chinese market becomes more saturated, India is the first market that many Chinese companies target overseas. At the same time, India’s internet market development benefits from Chinese investment and expertise.