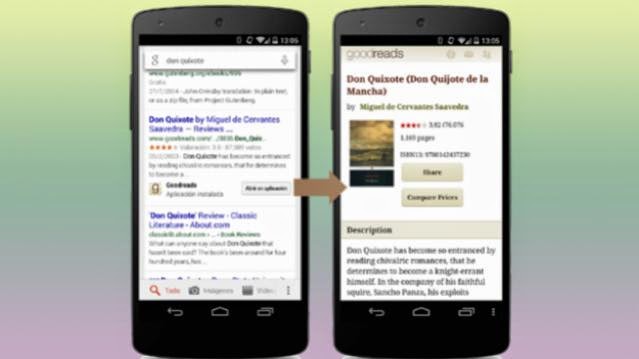 If you didn’t know this already, mobile web usage has declined dramatically over the past year as apps take the lead role as the window to the Internet on smartphones. This means less people are using their mobile browsers to surf the Web than the number last year.

As you can imagine, this is bad news for Google, which is the biggest source of Internet traffic. More and more people are starting to search within apps, where Google is being cut out. So what can the search giant do to combat the drop in searches through browsers? Well, to revive an old meme, it goes deeper.

Google started by indexing app content, or deep-linking it, on a limited basis, which would allow users to open content within apps instead of webpages when clicking on search result links. Initially, Google had rolled out this feature for only a few regions and apps, but starting today it’s being taken live worldwide and Google has added deep-linking support for a whole bunch of popular apps. Essentially, the feature would allow users to open search results within the related app, rather than in a browser. This would be possible when using the Google Search (app and mobile browser) on Android and iOS.

Developers who want to include support for deep-linking within search result will have to modify their apps slightly, and Google has released documentation and a set of guidelines to help them. Links for app content is shared with Google so they can be displayed clearly in search results.

Search results which link to app content will have the app icon displayed below the result along with an open within app button. You should start seeing more of these links as Google prepares for an even bigger drop in mobile web usage, which is expected this year.