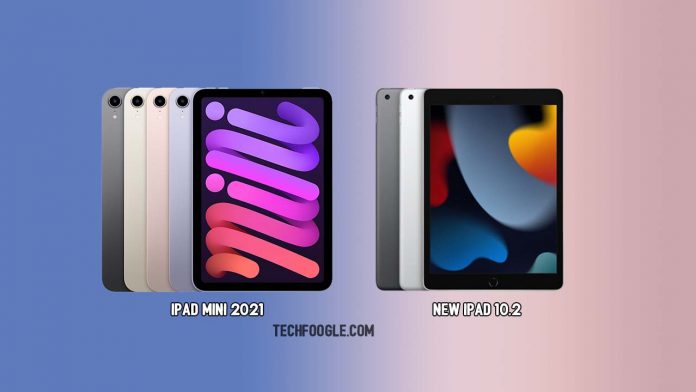 iPad Mini 2021 and New iPad 10.2: The new iPad with the A13 Bionic chip has been released, as has the new iPad mini with an all-new design.

Apple made a stunning announcement today at its California Streaming event, revealing the long-rumored iPad mini update. The iPad mini 2021 not only gets a new look, but it also has Touch ID, 5G support, and more. So, without further ado, let’s take a look at the new iPad mini’s specifications and features.

To begin with, the iPad mini now has the same design as the current iPad Air and Pro. That means the gadget is made entirely of metal, has flat sides, and, most significantly, has a USB Type-C connector at the bottom.

A notable improvement is the bigger 8.3-inch Liquid Retina display, which replaces the predecessor’s 7.9-inch screen. However, the iPad mini is still the most practical iPad in Apple’s lineup. The screen here has a brightness of up to 500 nits, a color gamut of P3, True Tone, and an anti-reflective coating. The bezels are slim, but Face ID isn’t included. Instead, Touch ID is incorporated into the top-mounted power button on the mini.

The iPad mini (2021) is powered by Apple’s new A15 Bionic processor. It has a 6-core CPU and a 5-core GPU, which boost performance by 40% and 80% over last year’s A14 Bionic processor, respectively. A 16-core Neural Engine and new ML accelerators are also included, allowing the mini to handle AI capabilities like Live Text.

In terms of cameras, Apple’s newest small tablet features a 12MP front camera as well as a single 12MP back camera. The selfie camera has a wider field of vision and Center Stage to keep users in the picture while moving around.

It’s also worth noting that the new iPad mini supports 5G, providing users with download rates of up to 3.5Gbps. To round out the connection choices, it also supports Gigabit LTE, Wi-Fi 6, and eSIM. The tablet also accepts the second-generation Apple Pencil, which magnetically attaches to the iPad mini for wireless charging.

The new iPad has the same 10.2-inch Retina display with True Tone support as the previous iPad. The Touch ID sensor is still present at the bottom. The A13 Bionic chipset, which is 20% more powerful than the A12 Bionic found in last year’s iPad, now powers it. It comes pre-installed with iPadOS 15.

On the selfie front, the smartphone has received a significant update. The new iPad has a 12MP selfie camera with a 122-degree field of view, as opposed to its predecessor’s 1.2MP FaceTime HD camera. It supports Center Stage and will move with you in front of the iPad.

This entry-level model also supports the first-generation Apple Pencil rather than the second-generation model offered by the new iPad mini.

Price and availability of the new iPad 10.2 and iPad mini