TechFoogle
HomeNewsApple finally waking up to India? 500 dedicated outlets may be set...

Apple finally waking up to India? 500 dedicated outlets may be set up soon 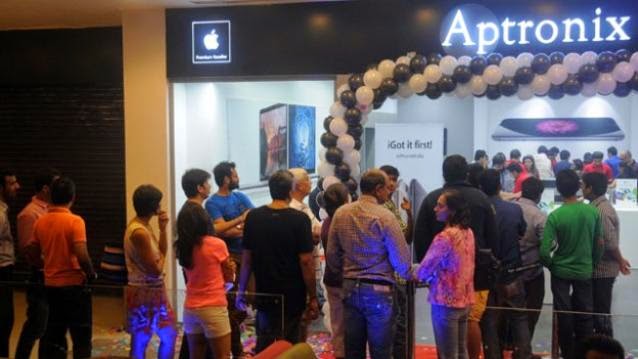 Apple is reportedly finalising plans to strengthen its presence in India by setting up 500 stores in the country and focusing on smaller towns and cities.

Though Apple iPhones have sold fairly well in India in the recent past, Samsung still tops the smartphone market in India, followed by Micromax and Xiaomi. “All this will change now. The company is finalizing plans to become a serious player in India, which is being seen as a strategic and one of the most promising markets globally,” an Apple executive told Times of India.

The iPhone 6 has been a massive success in developed countries, which has put Apple on course for a record quarter. Apple ranks number one in terms of the overall smartphone market share both in the US and UK. It has also been a massive success in China, though Xiaomi still
reigns as the top smartphone manufacturer there. It recently crossed the $700 billion market cap milestone in the US.

In India, however, Apple lags far behind not making it even to the top five smartphone vendors in the country. Thanks to the huge demand for entry-level smartphones and basic handsets, Apple faces competition from brands like Samsung, Micromax, Karbonn and Lava. To add to that, there are few retail stores that sell Apple products compared with its rivals.

According to Insider Monkey, a big problem for Apple in India is that the price of the iPhone is generally out of the reach of many average Indians. Unlike in countries such as the US and UK, it can’t sell its iPhones at a subsidised cost in exchange for a two-year contract with a wireless carrier. In India, the phones sell at a full retail price, which puts it in the Rs 40,000-plus price bracket.

Apple itself  did not take India seriously for a very long time. It had re-launched the outdated iPhone 4 earlier this year at a mid-range price, while newer phones such as the iPhone 5, 5s and the latest iPhone 6 models arrived considerably late. Similarly, many of the features in Apple devices are yet to come to India. Two years ago, Tim Cook had said “I love India, but I believe Apple has some higher potential in the intermediate term in some other countries.” He added, “We have a business there and the business is growing but the multi-layered distribution there really adds to the cost of getting products to market.”
Fast forward to 2014, and India has emerged as the fastest growing smartphone market in Asia.

While budget handsets continue to be the driver of smartphone sales, there’s also a growing demand for expensive smartphones. Apple, for one, can’t afford to ignore this market. Times of India reports that Apple sold around one million phones in India by September 2014 and expects the demand to increase this year and top 3 million. However, with the changing economic scenario along with the increasing buying power, India has become a viable market for premium smartphones.

There’s enough evidence to indicate a growing demand for Apple products in India. With the delay in the iPhone 6 launch in India, the phones were selling for over a lakh through grey-market channels. Ahead of the launch of the iPhone 6, it also saw buyers queuing up Apple stores to get their hands on Apple’s latest smartphones and the new iPhones ran out of stock just weeks after the launch. According to PatentlyApple, Apple is way ahead of Samsung in India in the premium smartphone market with a 55.3% share against Samsung’s 24.2% share.

Apple’s push for a greater reach in India will help it tap the burgeoning demand for premium smartphones. “These new stores will be smaller in size and could range from 300-600 sq ft against over 2,000 sq ft size of existing stores in bigger cities,” a source said to Times of India. The report adds that Apple is likely to carry on with its franchise model for selling its devices, which may be spearheaded by Redington. Apple is also expected to invest in direct advertising in India, apart from the publicity provided by its distributors.

Apple iPhone 6 and 6 Plus cameras explained: What the …