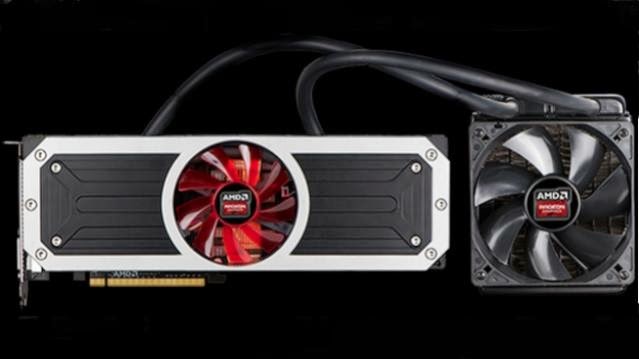 AMD has announced its latest flagship dual-GPU graphics card – theRadeon R9 295X2. The R9 295X2 houses two CrossFired Hawaii GPUs that are seen on the R9 290X. Accompanying this monster of a card is a dedicated advanced closed-loop, pre-assembled liquid cooling system from Asetek as well.
The R9 295X2 is based on the graphics core next architecture seen on the Hawaii GPUs. As a result of the two GPUs, you have a total of 5632 stream processors (2816 per GPU), 352 Texture units (176 per GPU), 128 raster operators (64 per GPU), a whopping 8GB of video RAM (4GB per GPU) and 2x 512-bit memory bus width. The total power consumption of the card is pegged around 500W, which is almost double that of the R9 290X.

A blown up view of the the AMD Radeon R9 295X2
The AMD Radeon R9 295X2 is targetted at gaming enthusiasts and promises good performance at 4K resolutions on maximum game settings. We can only confirm this after testing the card ourselves.
Features such as Mantle, AMD TrueAudio technology, Eyefinity technology will come baked into the card as well.
The AMD Radeon R9 295X2 will be priced at $1499 when it launches on 21st April. That comes to around Rs 91,000. With the NVIDIA dual-GPU flagship – the GeForce GTX TITAN Z priced at $3000 (Rs 1,80,000) and its single GPU flagship priced – the GeForce GTX TITAN Black priced around $1100 (Rs 66,000), AMD’s dual-GPU R9 295X2 is clearly filling a price gap.