Yovo: A Snapchat alternative that prevents others from taking screenshots of your photos 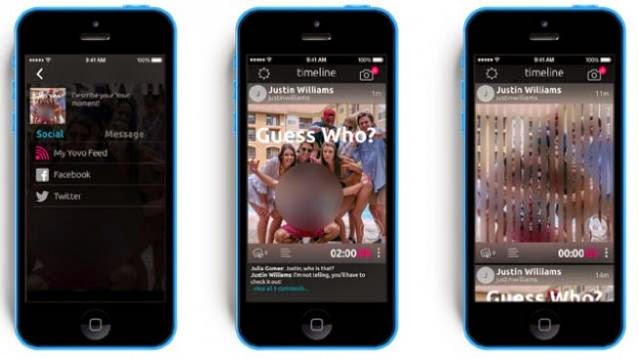 A new photo sharing app called Yovo protects your pictures and messages from being reproduced though screenshots. Similar to the likes of Snapchat and Slingshot, Yovo is a self-destructing photo sharing app with a few security options to prevent users from misusing your photos.

Developed by a privacy software company called ContentGuard, Yovo uses a common optical illusion to make it a lot harder for the receiver to capture a screenshot.

“Everyone is becoming more conscious of the digital trail they leave. It seems as though there isn’t a day that goes by where we do not see a headline about the consequences of inadvertent or malicious digital publication of our private lives,” its developer, Scott Richardson, was quoted as saying in media reports.
Yovo uses the Barrier Grid illusion, called D-Fence, which is similar to what we might experience driving past a picket fence. As we move fast, our eyes tend to see the stationary scene behind the palings rather than the palings themselves, CNET reported. You can blur out certain parts of your photo, set a viewing time from 1 second to 24 hours, and turn on screen capture scrambling to prevent others from saving your photos on their devices.

When taking a picture, the app overlays a blurred grille over the image. When the receiver opens the image, the grille moves, allowing them to see the picture. However, if they try to take a screenshot of the image, all they see is a picture with thick grills blurring out the details.

With reports of leaked Snapchat photos surfacing, the Yovo app might prove as a useful alternative to protect private information. In addition to security features, the app allows you to post pictures on Facebook and Twitter. The interface consists of a Timeline to view messages, the main camera screen and a community page where you can find and follow people.

The app is available for free on iTunes app store. Yovo claims that the app will soon be coming to Android devices as well.