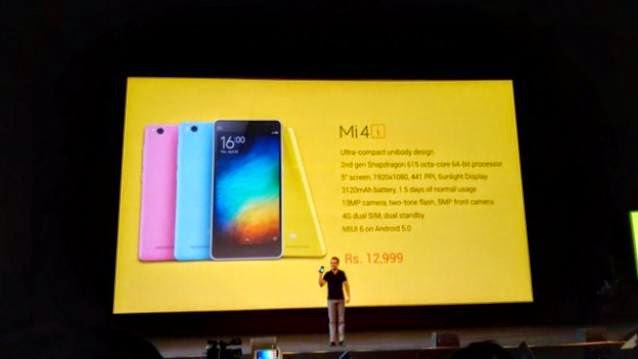 Xiaomi finally launched the Xiaomi Mi 4i at an event held in New Delhi on Thursday. The device is priced at Rs 12,999 and will go on sale on April 30. Registrations will start at 8 pm today on Flipkart. Initially, the device will be available on Flipkart, and later across all its channels including Mi website.

Xiaomi has given some serious thought to the new smartphone’s display. The Mi 4i features a 5 inch HD display along with a pixel density that goes up to 441ppi. Xiaomi claims that the smartphone has a higher color saturation than iPhone 6. It is a fully laminated OGS. In other features, the Mi 4i comes with Sunlight Display, a technology which allows the phone to do dynamic tone mapping, which in turn, keeps  the image quality balanced in bright sunlight.

The device is powered by a 64-bit Snapdragon 615 processor. It comes with four performance cores at 1.7 GHz, and four power saving cores at 1.1 GHz. They have been designed by Qualcomm India. The device owns a 2GB RAM and includes 16GB on-board storage.

In terms of camera, the smartphone sports a 13MP rear camera with f/2.0 aperture and dual tone flash and also includes torch feature for low light focusing. It also gets improved HDR feature.

For those selfie lovers, the Mi 4i sports a 5MP front facing camera. The beautify feature included comes with tools like wrinkle remover, skin smoothening and so on. It also gets a selfie timer feature.
The dual micro-SIM smartphone runs on Android’s latest Lollipop-based MI UI 6. It will feature Visual IVR to MIUI to bypass those long IVR calls by giving you a text output of preset options.

Towards the end of the launch event, Xiaomi also launched its water-resistant Mi Band in India for Rs 999.