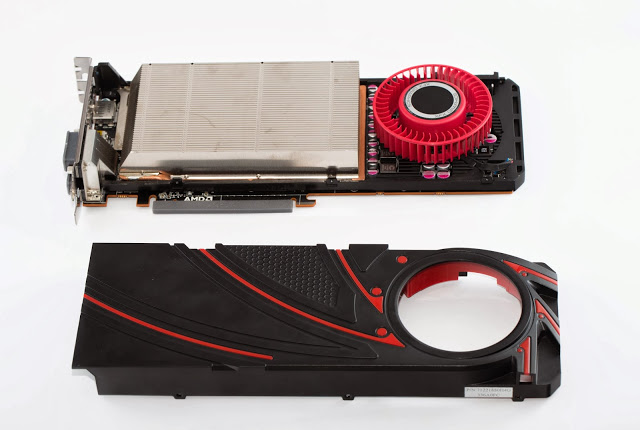 AMD announced their Hawaii cards towards the end of September and we have looked at AMD’s R9 series 280X and 270X in the past. Now it’s time for the elder sibling the R9 290 which is a notch lower than the higher end R9 290X. From the R9280X and R9270X we have learnt one lesson – AMD is offering a killer value proposition with these cards. Will the R9 290 continue that trend and which high end NVIDIA card’s feathers does the 290 ruffle? Let us find out. 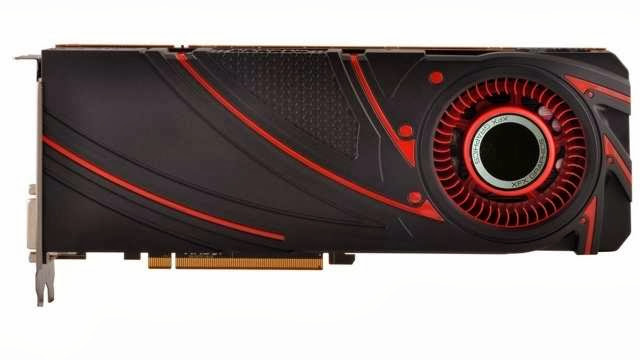 The XFX R9 290 adapts the exact same design as the stock AMD R9 290 having a sturdy brown plastic sheath with red-coloured accents. It has a blower-style fan. Air is taken in from the three entry points on the right hand side and blown out of the vents on the rear side and on the top edge on the rear side. On opening the plastic shroud you will find the aluminum heatsink placed atop a copper block on the left hand side. 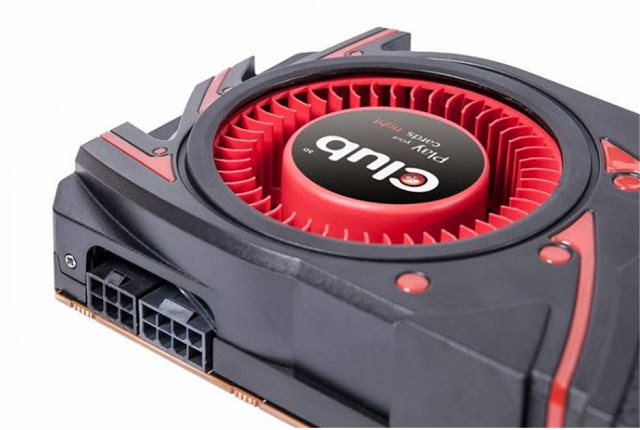 On opening the top shroud, you will find an aluminum heat sink

The XFX R9 290 houses the Hawaii GPU built using the 28nm process node and is based on the Graphics Core Next architecture. It is specced slightly lower than the flagship R9 290X. The R9 290 has 2560 stream processors (SP) as compared to the 2816 SPs seen on the 290X. Even the boost clock speed is around 947MHz for the R9 290 whereas it is 1GHz for the R9 290X. Both cards sport the same 4GB GDDR5 RAM with a 512-bit memory bus. The chart below gives a comparison between different cards from the new series.

Unigine Heaven 4.0
Unigine Heaven 4.0 is a DirectX 11 benchmark based on the Unigine engine which can be used to test the stability of a GPU under stressful conditions. It involves a run-through of an imaginary land involving floating islands, cobblestoned streets, smokey atmosphere, going through caves lit with burning fires, dragon statues and so on. You can adjust the tessellation, anti-aliasing filters, anisotropic filters etc. We run this test keeping the settings at Ultra, 8x Anti-asliasing filter and Tessellation at Extreme.

Battlefield 3
Battlefield 3 is a first-person shooter video game developed by EA Digital Illusions CE and is based on the new Frostbite 2 game engine. The game only supports DX10 and DX11, which enables enhanced in-game destruction with Destruction 3.0, creating more refined physics than its predecessor and quasi-realtime radiosity using Geometrics’ Enlighten technology. The game is a visual treat and a nightmare for graphics cards, which makes it perfect for our test. We used the “Ultra High” preset, Post AA – High, Blur – Full, Field of View – 90, Level – “Fear no Evil”.

Crysis 2
Crysis 2 is a first-person shooter video game developed by Crytek and is based on the new CryEngine 3. Just like the first iteration of the game, Crysis 2 continues to be one of the best-looking shooters to date. The settings used for this benchmark were “Ultra and High” preset in Adrenalin, DX11 and High-resolution texture patch.

Dirt 3
Dirt 3 is a rallying video game and the third in the Dirt series of the Colin McRae Rally series, developed and published by Codemasters. The game is extremely scalable and features DX11 tessellation effects. We used the built-in benchmark tool, along with “Ultra” quality preset.

Metro: Last Light
Metro: Last Light is a first-person shooter video game that continues Metro’s legacy of being one of the most demanding games for the best of GPUs. The game has a lot of DX11 eye-candy, which really puts a strain on any GPU. All DX11 features were enabled for the benchmark and we used the built-in benchmark for this test.

Bioshock Infinite
Bioshock Infinite developed by Irrational Games uses a modified version of the Unreal Engine. It’s a first-person shooter which takes place in a fictional floating city called Columbia. We ran the benchmark using the Adrenaline Benchmark tool and used the Ultra and Medium settings. In the Ultra settings you have FXAA On, Ultra texture detail, 16x AF, Ultra dynamic shadows and with the Medium settings you have FXAA On, High texture detail, 8x AF and High dynamic shadows.

Tomb Raider
Tomb Raider is a third-person shooter which is a reboot of the famous series with Lara Croft as the protagonist. In this reboot, she is ship-wrecked on a mysterious island which presents its own set of challenges which Lara has to overcome. The game is based on a customised CrystalEngine. It also features the AMD TressFX technology which adds more realism to hair rendering and physics. We ran the benchmark using the in-built benchmark tool at the Ultimate and Ultra settings. On the Ultimate preset, you have TressFX activated, 16x AF, FXAA whereas the Ultra preset has Normal hair quality, 16x AF, FXAA.

Temperatures
We noted the temperature of all the participating cards at idle and load states. The fan speeds were kept on auto. We noted maximum load temperatures after running benchmarks such as FurMark at 1080p preset, 3D Mark 11, Battlefield 3 and Metro: Last Light and taking an average.

Power Consumption
We used an energy monitoring device to measure the power consumed by the total rig with the graphics cards on them. The Cooler Master 800W PSU was plugged into the power meter which gave out the power consumed in Watts on the display. After powering on the system we let it stay unused for a good five minutes to get the idle power reading and then ran three instances of FurMark 1080p preset to get the maximum load power.

Verdict and price in India
When observing the charts, we note that the XFX R9 290 is behind the NVIDIA GTX 780Ti and the ZOTAC TITAN (only in some games). But when you look at the price points of these cards – NVIDIA GTX 780Ti selling around Rs 59,000 and the ZOTAC GTX TITAN selling around Rs 68,000 – the XFX R9 290 at Rs 35,500 looks to offer better value proposition. Also looking at each game you will notice that the XFX R9 290 is not very far from the GTX TITAN in terms of frame rates. In fact in Battlefield 3, Bioshock Infinite and Sleeping Dogs at 2560×1440 resolution, the R9 290 exceeds the TITAN. It does tend to heat up, what with load temperatures going to 94 degrees Celcius and at 47 degrees Celcius, it had the highest idle temperature as well which isn’t great. So you might have to consider getting a side-panel fan to keep things cooler.

We will compare this against the flagship R9 290X as soon as we get our hands on one, but at the moment, the XFX R9 290 offers quite a good deal considering it offers TITAN-like performance at almost half the price. It is a strong contender for a Value For Money award, but we would rather wait till we test out the R9 290X.