By techfoogle
- Last Updated: July 20, 2017
Share
Facebook
Twitter
Pinterest
WhatsApp
Email
The Galaxy S4 mini has been out for a few months, and all major US carriers will be launching the device in the coming weeks, but it looks like the Galaxy S III mini from last year still has some life left in it. AT&T recently launched the S III mini, and now it seems Verizon has decided to follow suit, as prolific leakster evleaks has tweeted an image of the Verizon S III mini in blue.
First thing you’ll notice is that the Verizon logo is present on the home button, similar to the S4 mini, which is going to put a lot of people off. Like AT&T, Verizon will likely launch the S III mini as a budget model at $0.99 on a two-year contract, with a newer Qualcomm processor (the Snapdragon Plus MSM8930) and a larger battery, so that buyers can enjoy LTE internet speeds. A launch date isn’t known yet, but it shouldn’t be long before the S III mini arrives on North America’s biggest wireless carrier network. 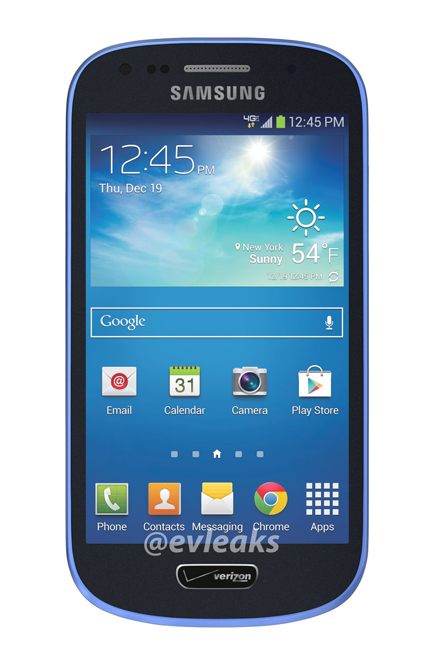