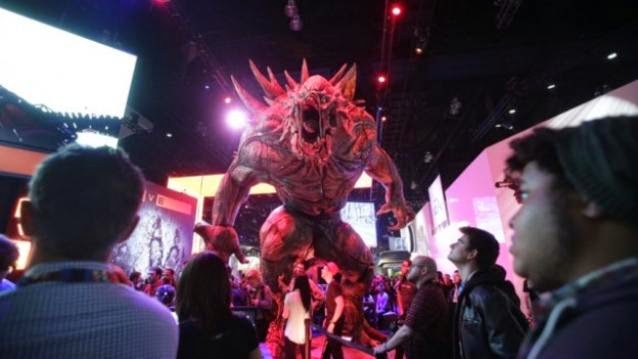 In this June 10, 2014 file photo, people stand next to a monster character from the video game “Evolve” as they watch gamers play the video game at the Electronic Entertainment Expo, in Los Angeles. (AP Photo)

Anaheim: When it comes to video games, are they better late than never?

At this week’s GameStop Expo, the video game retailer’s annual consumer-centric event, more than 3,000 attendees had the chance to test drive highly anticipated titles like Evolve, Dying Light and Battlefield Hardline in the halls of the Anaheim Convention Center. However, it’s probably the last time this year that gamers will be able to play those particular titles..

That’s because they’re among the growing list of games initially set to be released in 2014 that have been delayed until 2015. The publishers behind the monster fighter Evolve, zombie survival adventure Dying Light and cops-and-robbers romp Battlefield Hardline each postponed their release dates earlier this year so developers had more time to tweak the titles.

It’s a frustrating trend that’s prompting many players to bemoan the least fun game of all: The Waiting Game.

“Oh, it sucks,” said Dan Adams, an expo attendee who came to preview games likeFar Cry 4 and Call of Duty on the show floor. “I know games are delayed to make them better, but it definitely feels like it’s happening more often these days. It really messes with your expectations when you think you know when a game is coming out, and then – boom – it’s next year.”
Other games previously set for release this year that have been pushed to 2015 include the online apocalyptic shooter Tom Clancy’s The Division, the Dark Knight sequel Batman: Arkham Knight, the supernatural historical adventure The Order: 1886, the sprawling role-playing sequel The Witcher 3: Wild Hunt and the open-world movie adaptation Mad Max.
“There are so many games for next year, it makes me worried sometimes,” said Yves Guillemot, CEO of Ubisoft, at the Electronic Entertainment Expo in June. “We are always caught between two things: How can we make it better but take full advantage of what we started a few years ago? It’s always a difficult decision because there are always other games coming.”
Deciding to delay is as much a business decision as it is a creative one.
While setting a release date helps to build hype for a game, if it comes out on time but doesn’t meet gamers’ expectations, there’s less chance a publisher will greenlight a sequel. Historically, consumers are forgiving of most overdue games. For instance, the fourth-month delay of last year’s Grand Theft Auto V hardly seemed to impact sales.
That’s likely to be true for the latest batch of tardy titles, which also aren’t expected to affect the sales of the newer PlayStation 4 and Xbox One consoles. In fact, pushing games like Evolve to February 10 and Batman: Arkham Knight to June 5 might actually boost the bottom line for publishers like 2K Games and Warner Bros. Interactive Entertainment.

“I don’t think any of the delayed games are system sellers, so I don’t really think it makes a lot of difference,” said Michael Pachter, an analyst at Wedbush Morgan. “The games coming out will benefit from lower competition, and the delays smooth out the release calendar, so they’ll probably create an opportunity for greater success all around.”
It also means newcomers like Evolve, The Order and Division won’t have to compete with the latest editions of long-running series, such as military shooter Call of Duty: Advanced Warfare, fantasy epic Dragon Age: Inquisition, shoot-’em-up Far Cry 4 and French Revolution-set Assassin’s Creed: Unity. They’re still on track to come out in 2014 – well, for now.
“It’s still the best slate of games I’ve seen since I’ve been here, and I’ve been here nine years,” said Tony Bartel, president of GameStop Corp. “There are plenty of genres. We think it’s all going to come down to affordability. We’re working on programs specifically around trades to put currency in the hands of our customers, so they can afford all of those games.”
Associated Press