The $499 Microsoft Xbox One X will be the most powerful console ever, to arrive 7 November 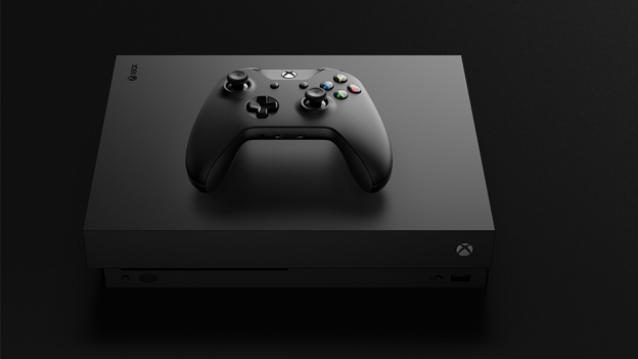 At long last, Microsoft has officially taken the wraps off the Xbox One X a.k.a. Project Scorpio. This long expected console is a mid-cycle refresh of the current console generation and is meant to take on Sony’s PlayStation 4 Pro console with true 4K capabilities.

Unveiled at E3 2017, the world’s largest annual gaming expo, the Xbox One X’ hardware itself isn’t much of a surprise. Microsoft has teased the console’s hardware a number of times these last few months and the only items we weren’t sure of were the final design and the final price of the console.
To recap, the new console is running an 8-core AMD CPU clocked at 2.3 GHz, a GPU that’s rated at 6 TFLOPS, 12 GB of GDDR5 RAM and a 1 TB HDD. This is a huge bump in performance over the original Xbox One and about 50 percent more power than the PS4 Pro, on paper anyway. A Blu-Ray drive is also included in the package.

The console should, in theory, be capable of rendering games at 4K and 60 fps, a rather ambitious target. Early reports do suggest that while some games will run at 60 fps at 4K, most will run at 30 fps. Other features like supersampling are designed to enhance the 1080p performance of the console.
Engadget reports that the console features a vapour-chamber based cooling system designed to keep the console running at full tilt for extended periods.

The PS4 Pro from Sony does offer a VR headset, which is something the One X lacks right now, but there is word of multiple AR and VR headsets in the works from various manufacturers.
The flagship title for the console at launch is, of course, the Forza Motorsport 7, which will be one of the first games to natively support 4K @ 60 fps rendering on the new console.

There is no word on a release date or launch price in India. We expect pricing to be in the same ball park as the PS4 Pro, which currently retails for around Rs 40,000 in the country.
In related news, Microsoft also announced a $50 price drop on the Xbox One S.