Text neck: Could your neck really fall off if you keep texting? 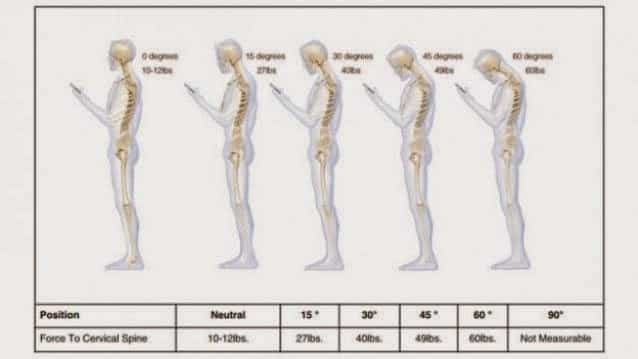 Texts can be  a real pain in the neck, believes Kenneth K. Hansraj, chief of spine surgery at New York Spine Surgery & Rehabilitation Medicine, who has published his study in the National Library of Medicine.

‘Text neck’, or the posture we take when reading or writing text messages, is said to damage the neck to such an extent that it may require a surgery to get it corrected, says the study. He said to the The Washington Post that it is “an epidemic or, at least, it’s very common. Just look around you — everyone has their heads down.”

According to Hansraj, the human head weighs 10-12 pounds in a neutral position. However, at 30 degrees it is 40 pounds, 50 pounds at 45 degrees and 60 pounds at 60 degrees. He further said that people typically spend between two and four hours a day with their heads tilted towards the device. This means somewhere between 700 and 1,400 hours a year with additional stress on the spine. Teens could be spending somewhere around 5,000 hours a year with a tilted head glued to their devices. According to his research, kids don’t even realise that their heads are tilted for a prolonged duration.

Talking about a solution, Hansraj said people can avoid the text neck condition by keeping their heads in the neutral position, and look down with eyes to avoid stressing the spine or neck. “It’s not a military drill,” he said. “Don’t get in that position and stay there. The more you do it, the more the muscles build and ligaments strengthen.”

Many medical experts have already started arguing against the accuracy of Hansraj’s calculations. Ian Dorward, a neurosurgeon at Washington University tweets about the lack of evidence and random numbers in the reasearch. He told The Atlantic, “To say that there’s this epidemic of ‘text neck’ is totally unfounded. All he [Hansraj] has is a computer model, and he doesn’t even spell out where these numbers are coming from.”

Now hunching over to do something isn’t a new syndrome. We hunch in a similar fashion while reading a book, carrying a baby and so on. So, why treat texting differently. “People are walking around now while texting, falling into water fountains and lakes and walking into traffic—that’s a real danger,” Dorward added.

Hansraj’s paper also talks about how essential it is to attain the right postures or it could affect a person’s hormonal balance. While it is true that bending the head forward to look into a phone has an impact on the spine, it’s difficult to measure its impact as of now.