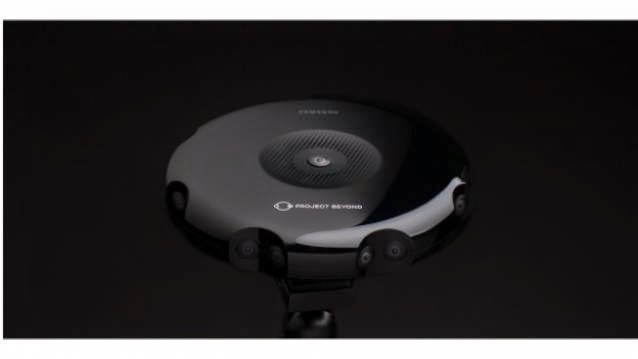 Samsung announced the Project Beyond camera at its 2014 Developers Conference last night. Project Beyond is a saucer shaped camera capable of capturing a 360-degree field of view in true 3D. This will enable it to shoot 3D video and stream it to a Gear VR headset. According to Samsung, it captures a Gigapixel of 3D footage in every single second!

The camera was showcased by Pranav Mistry, Samsung’s VP of Research, who said that, “Beyond is a new kind of camera that gives a new kind of immersive experience.” It makes use of an array of 16 full HD cameras which are placed at a 45-degree angle in pairs of two along the circumference of the casing. There is one camera at the top as well.

Beneath the camera are Project Beyond’s processor and storage, which also includes an arrangement for high-speed connectivity to get the 3D footage shot by the camera onto other VR headsets. Each camera has an image sensor and a controller associated with it. To be able to capture a 360 degree view, naturally Project Beyond employs ultra-wide angle lenses on its cameras.

The blown up view of the Project Beyond camera

There is no word out on its price or when the device will be officially released. There was no clarity if the product will even be available for mass market consumption. Samsung was being very secretive as to the target audience.

Those who have had a chance to see the footage shot by the Project Beyond camera have come away impressed at the immersive nature of the experience.

But while the experience is immersive, the camera is a stationary one. This means that your point of view will be limited to the position of where the camera was placed. According to Engadget, the camera is designed to be a static one and isn’t meant to be a GoPro replacement.

As for the video quality, it got a thumbs down. “The quality of the video itself wasn’t quite as impressive as I was hoping for, either — it’s noisier and grainer than I expected, given the relatively high resolution output of the Gear VR headset,” said The Verge. Whereas Engadget said, “The 3D video did give me a tiny bit of a headache as I turned around in a circle, and I was surprised at how grainy and pixilated the video was — the combination of the two took me out of a supposedly immersive experience. It’s a reminder that this is still very much in beta, and I imagine the quality will be tweaked over time.”