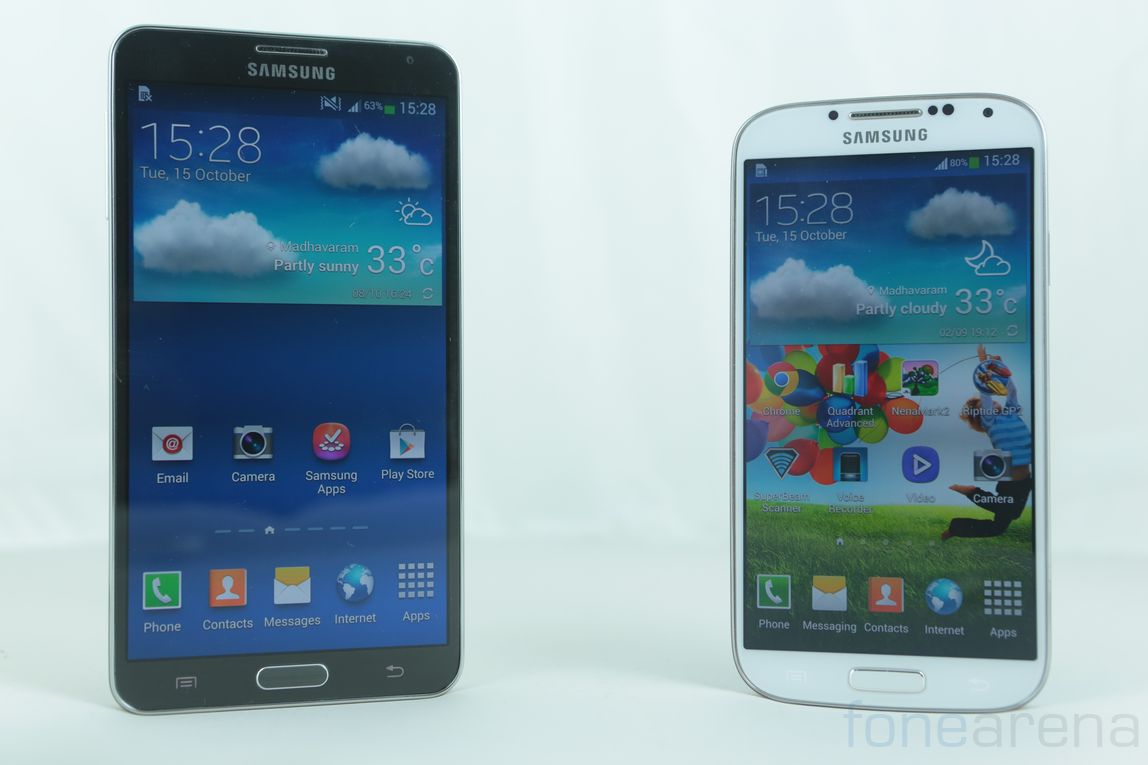 You can check out the camera comparison video between the two device right below. 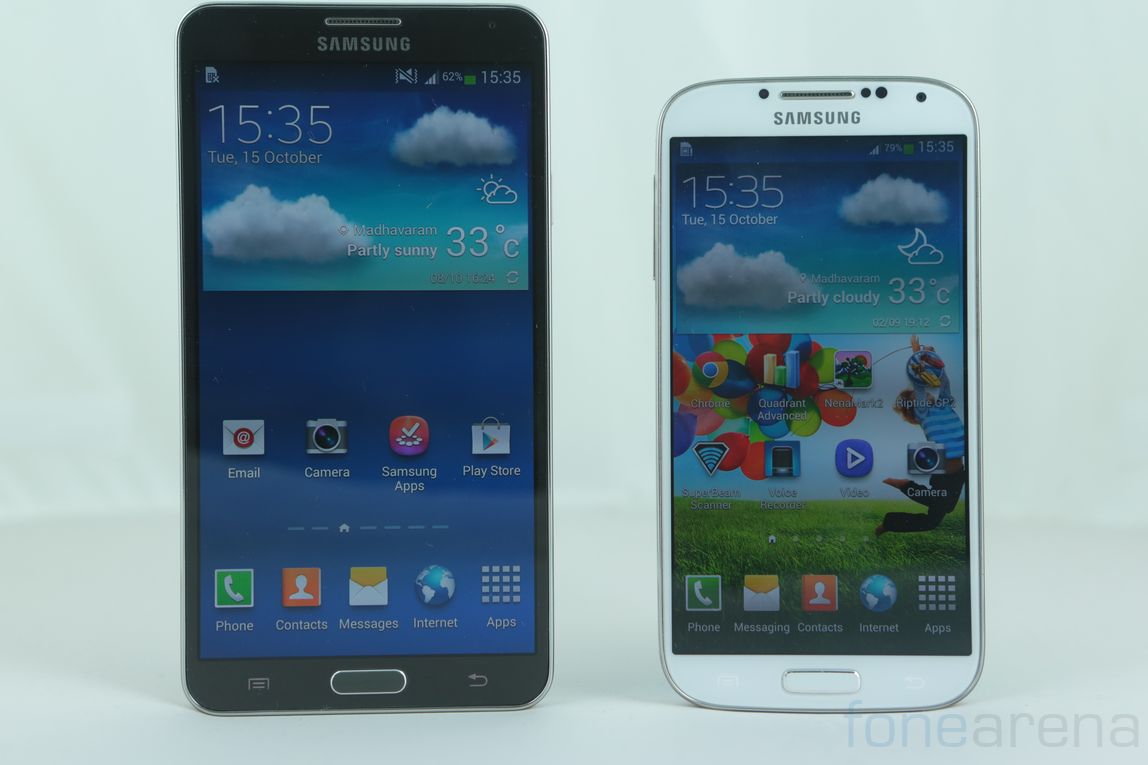 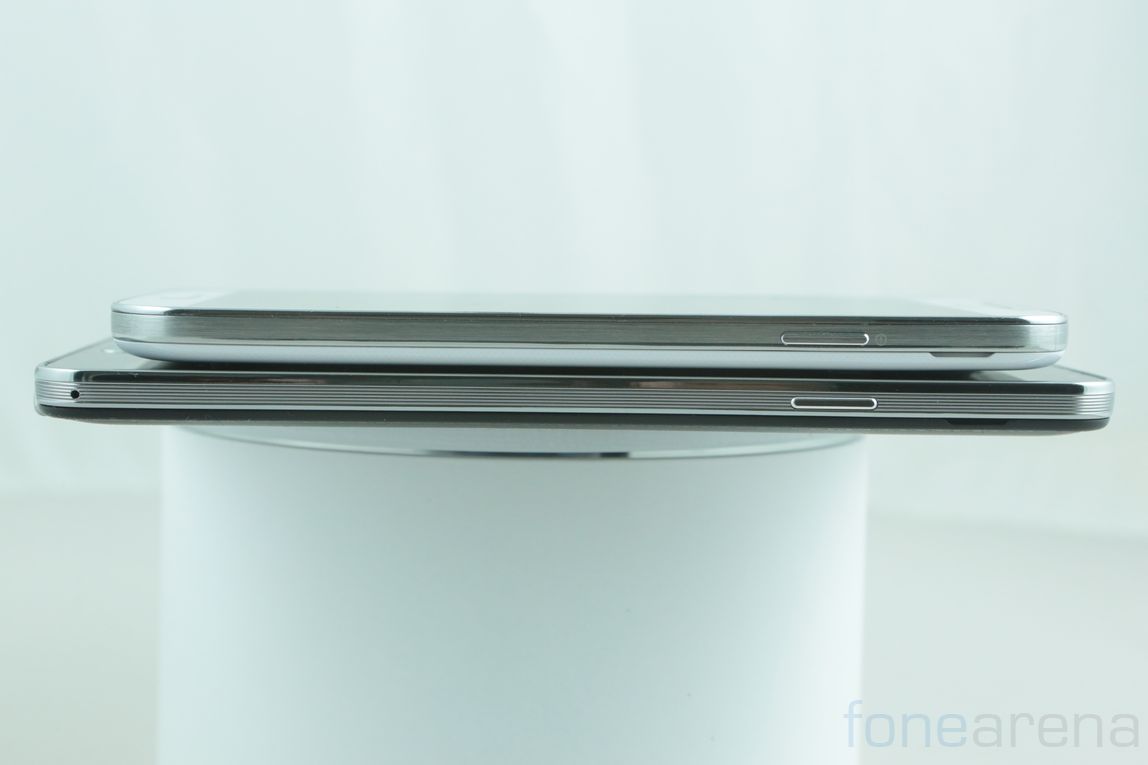 On the bottom, we have an uncovered microUSB port and a microphone on both the phones. On the Galaxy Note 3, loud speaker and bigger microUSB 3.0 port are present at the bottom and it comes with a S-Pen stylus compartment. 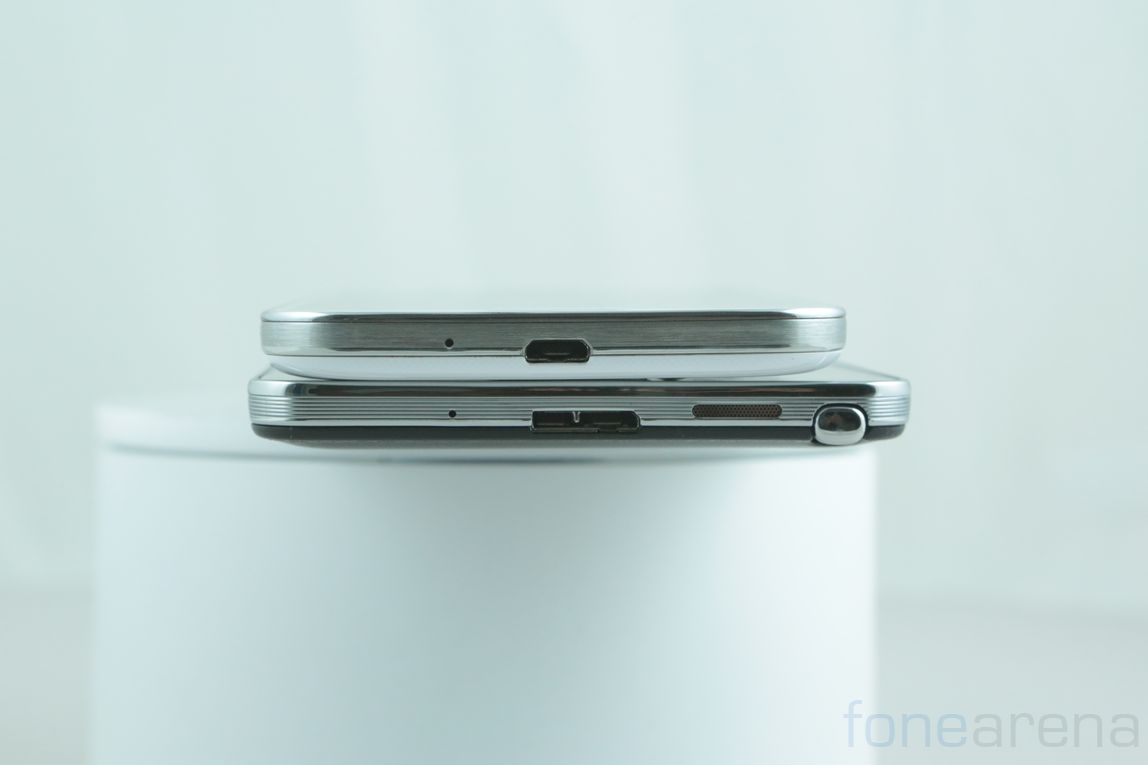 The volume rocker is present on the left side. The keys are made of plastic, but offer nice feedback. 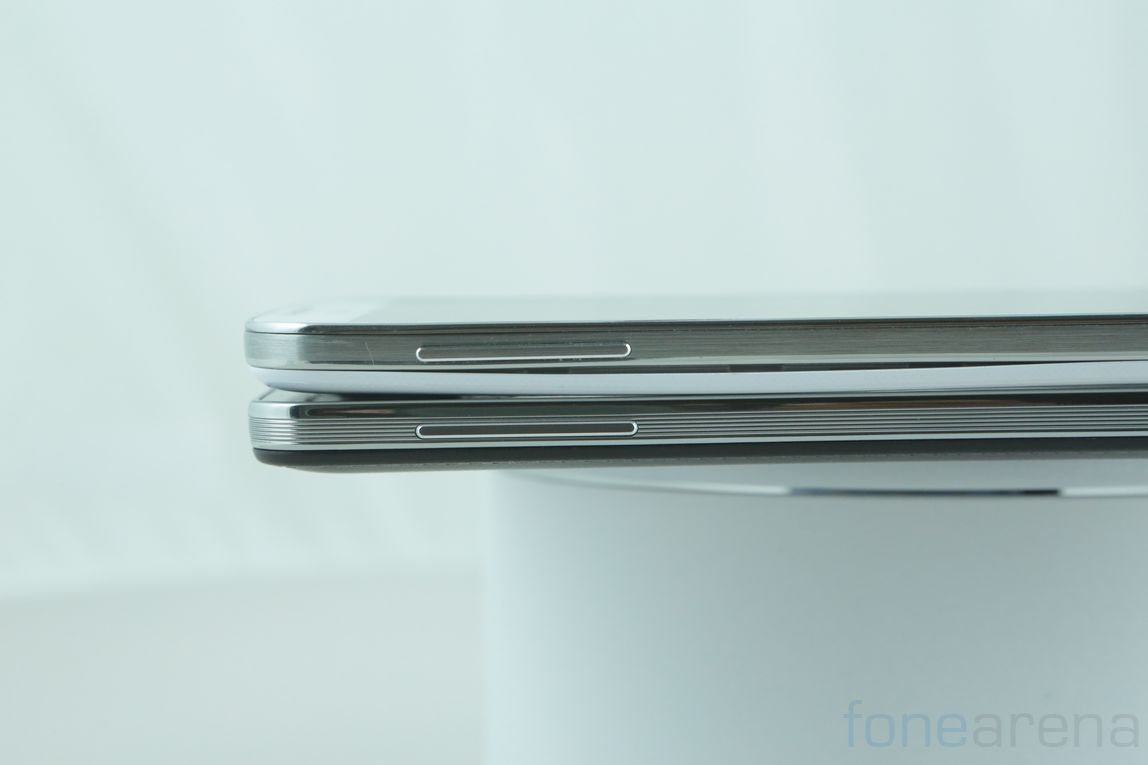 On the top we have the 3.5mm jack, secondary microphone and IR blaster on both the phones. 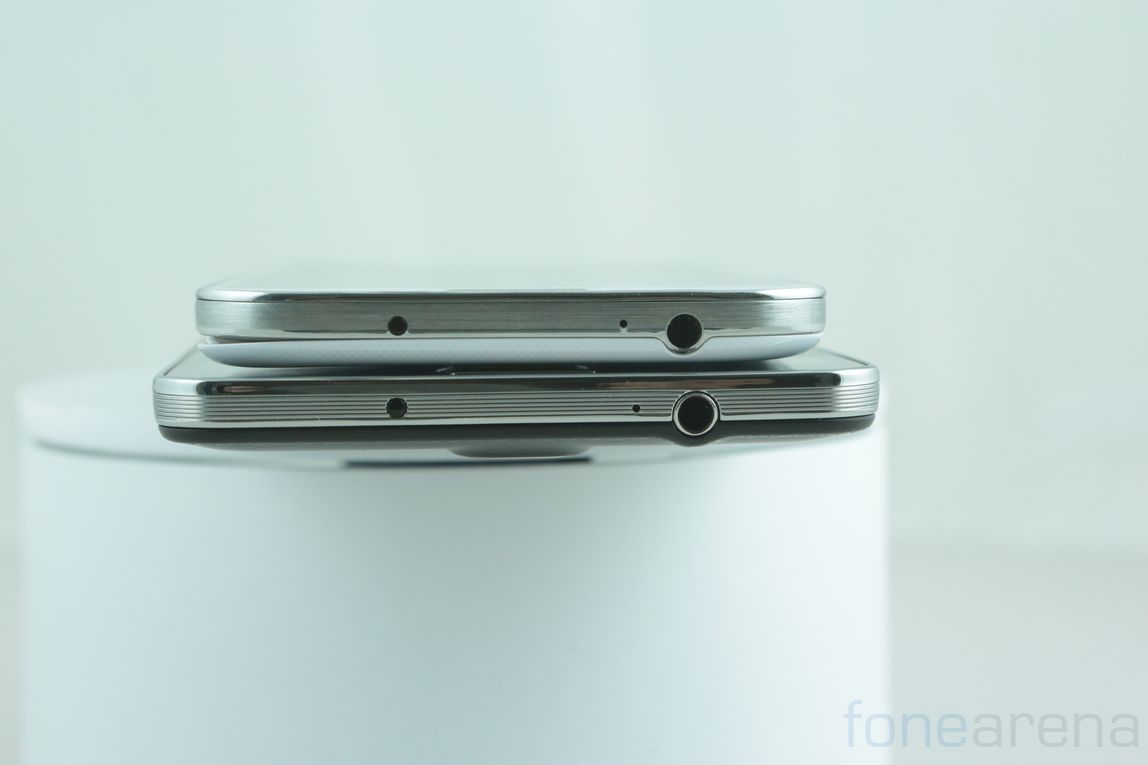 On the front, above the display, we have the earpiece at the center and the ambient and proximity sensors, the 2MP front facing camera are at the right of the earpiece in both the phones. The notification LED is on the left side of the earpiece and on Galaxy S4, we have an extra light sensor which is not present in Galaxy Note 3. 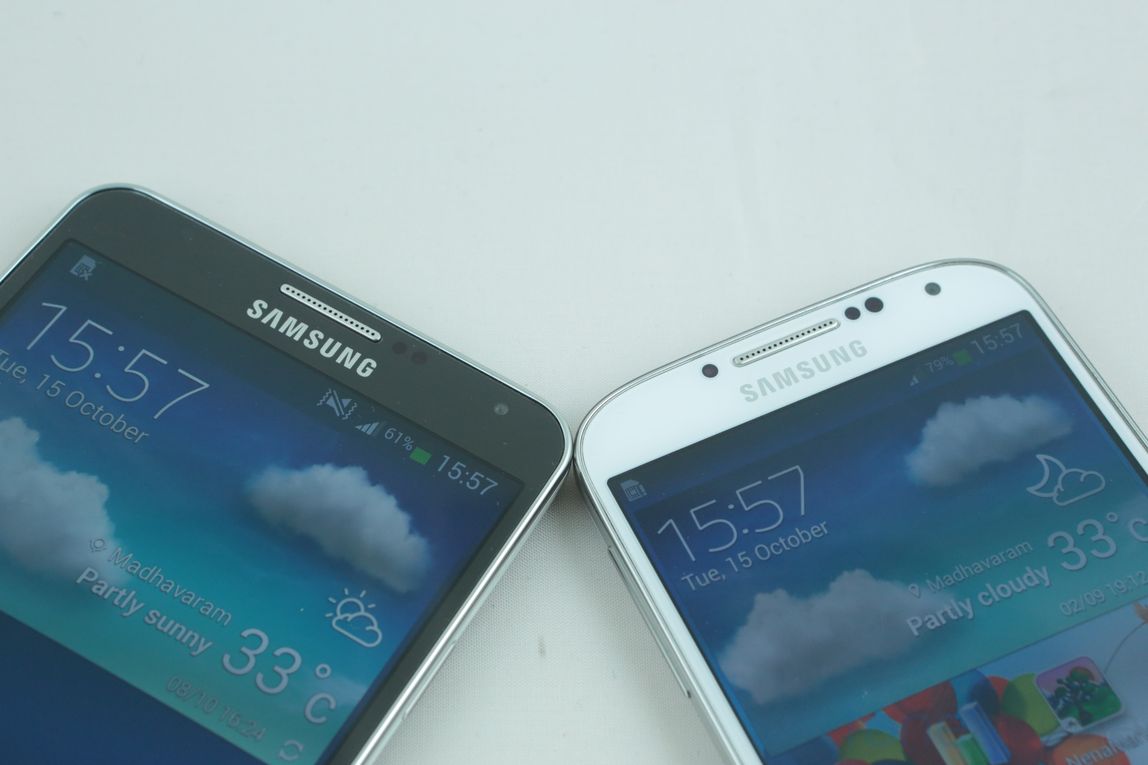 The bezels on the both the phones are quite thin and that has greatly made it look sleek.
Below the display, we have the usual Samsung arrangement with a physical home button at the center and capacitive touch keys on either side. 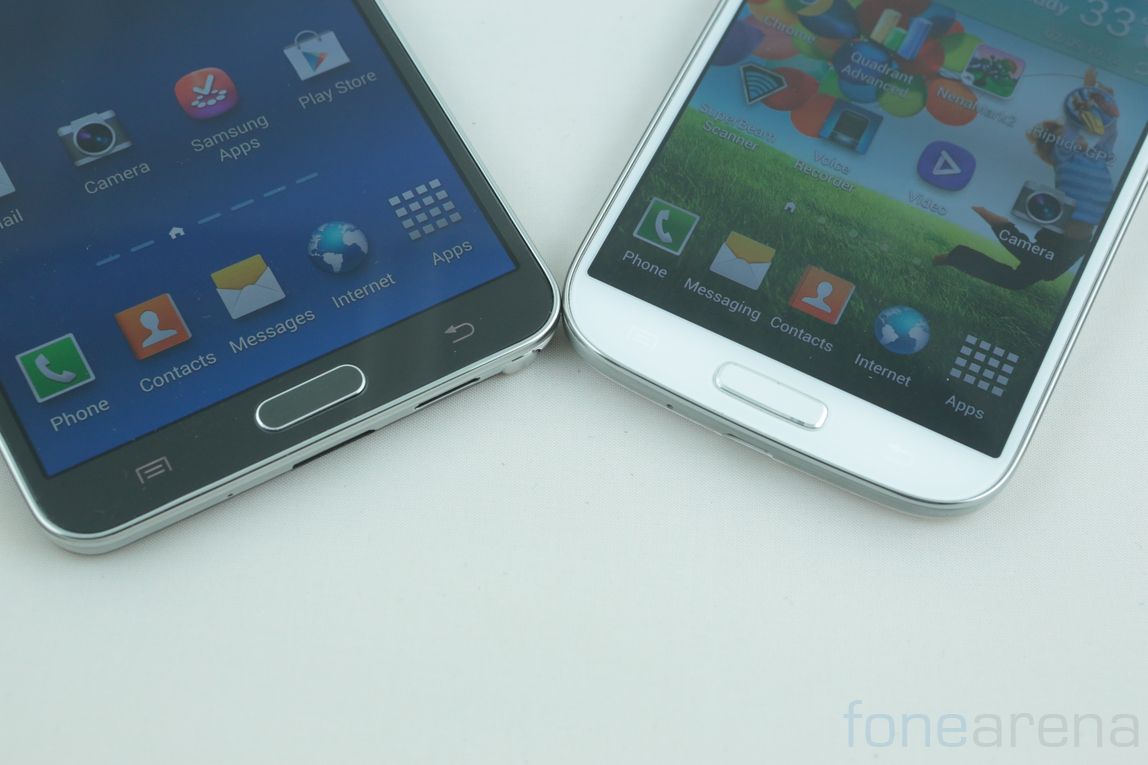 Moving to the back, we find some drastic difference. The much talked about feature of the Samsung Galaxy Note 3′s design and build is seen here -it is a pretty good faux leather finish that gives it a great texture and prevents it from scratches and finger prints. The Galaxy S4 on the other hand has a regular Samsung glossy textured plastic finish that makes it a finger print magnet and prone to scratches. There is a 13MP camera with an LED flash below it on the both the devices. 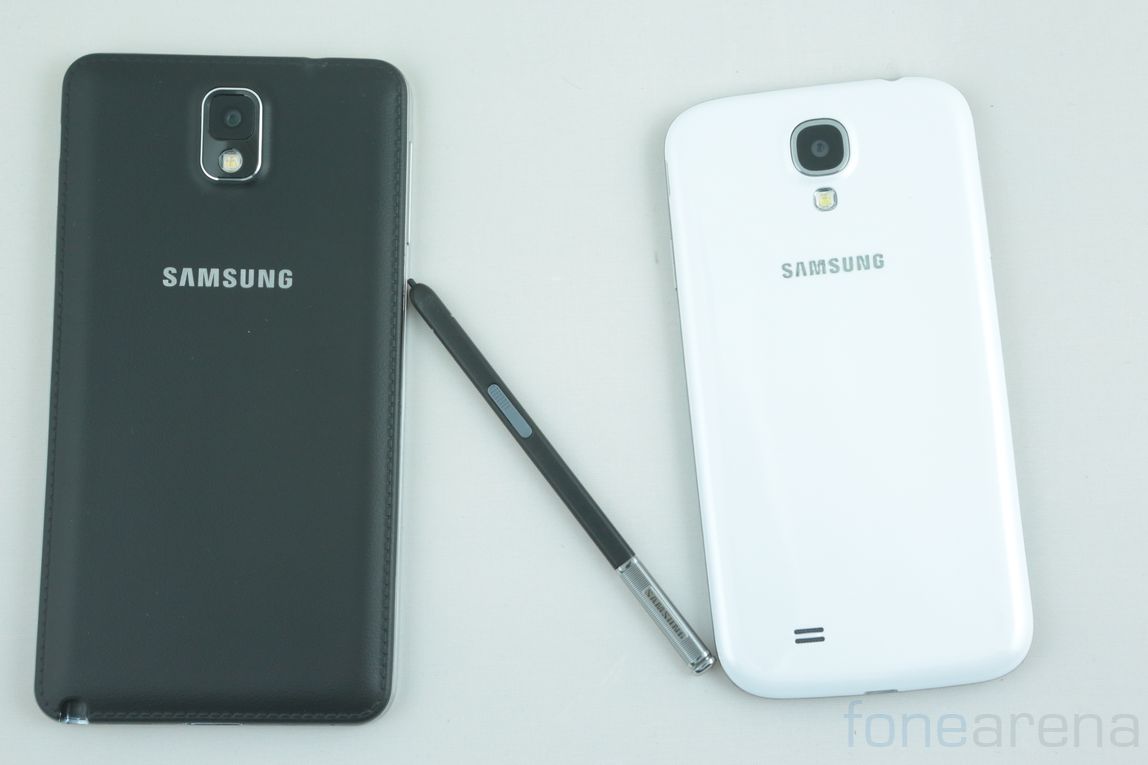 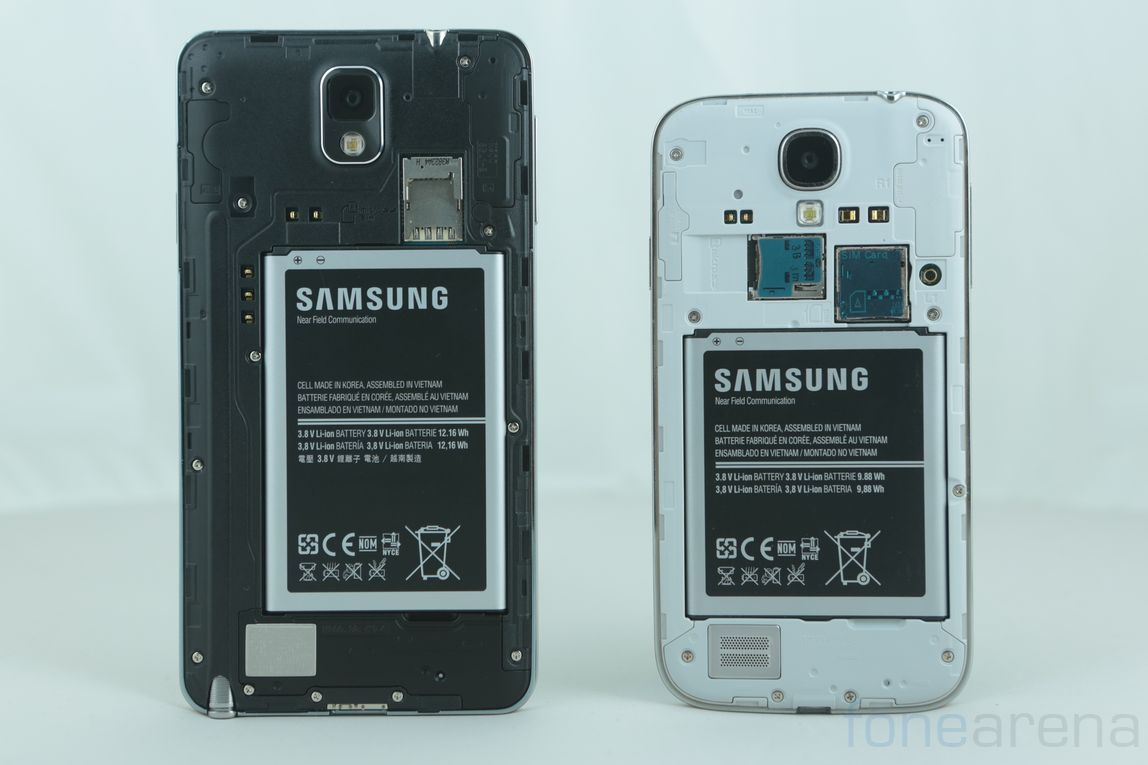 Overall, in terms of build quality and design,Galaxy Note 3 looks like a clear choice, but when you bring in size as a factor, the scales are now pointing to the Galaxy S4. At the end, it is a matter of personal preference when it comes to the choice between a huge 5.7inch phone with a nice textured back or a 5inch compact phone with a glossy plastic back. 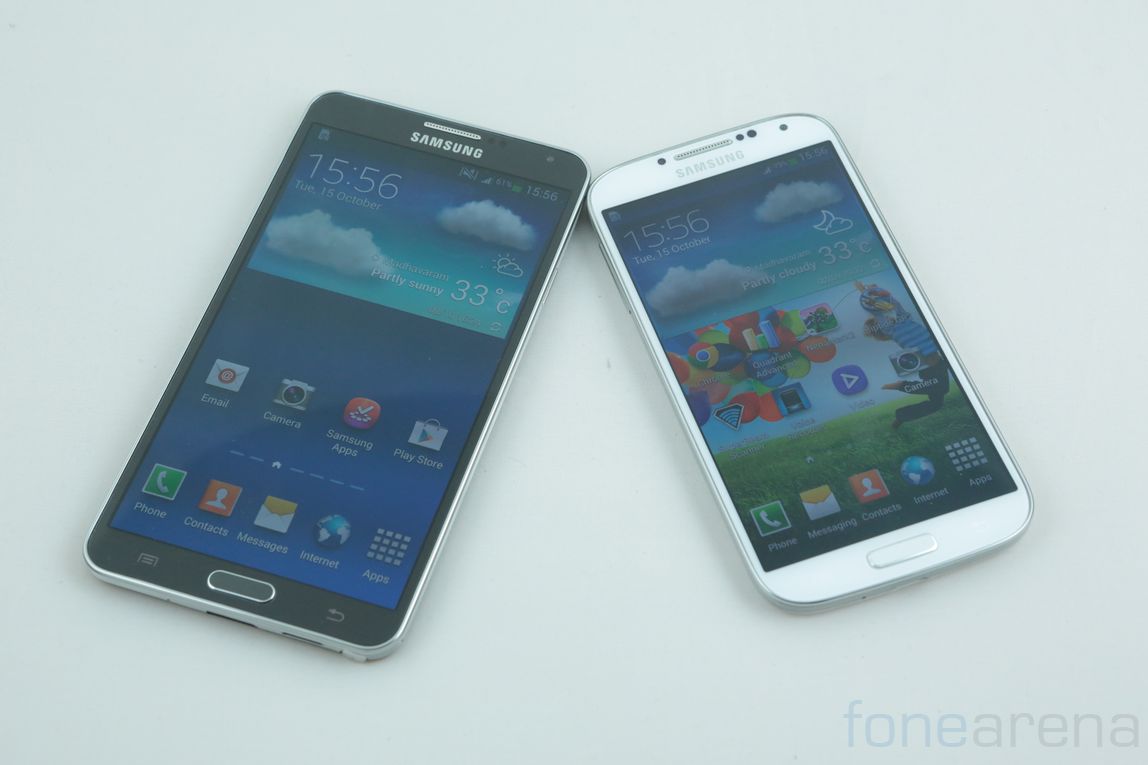 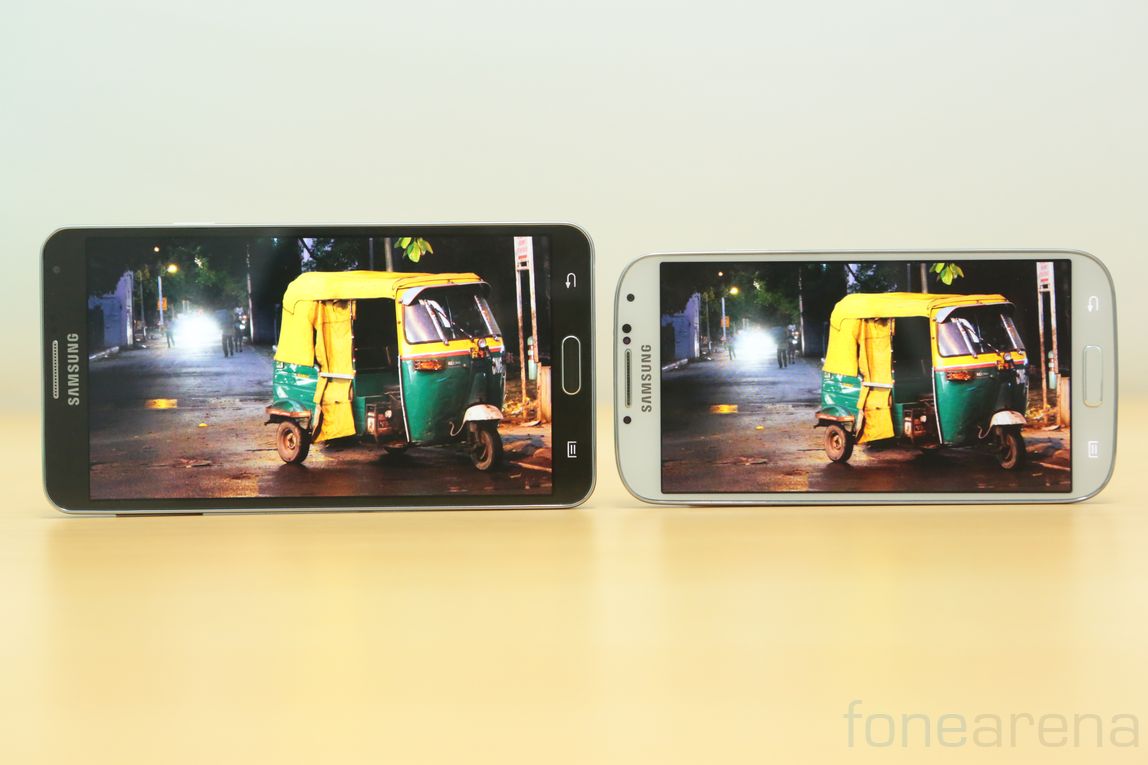 Samsung Galaxy Note 3 has better brightness and the whites appear more white on Galaxy Note 3 than on the S4. Viewing angles are great on both the phones. Color Saturation and contrast are quite similar on both the phones.
Overall, the display on the Note 3 is bigger, but the display on the S4 is sharper. There is very little to separate these two phones in terms of display.
Hardware and Performance
Samsung is known to use its home-bred Exynos chipset for its premium devices and we have two of Samsung’ best here. Samsung Galaxy Note 3 is powered by a 1.9GHz octa-core Exynos 5420 SoC, 3GB and Mali T628 MP6 GPU while the SamsungGalaxy S4 is powered by a 1.6GHz octal-core Exynos 5410 SoC, has 2GB RAM and graphics are taken care by PowerVR SGX 544MP3 GPU. 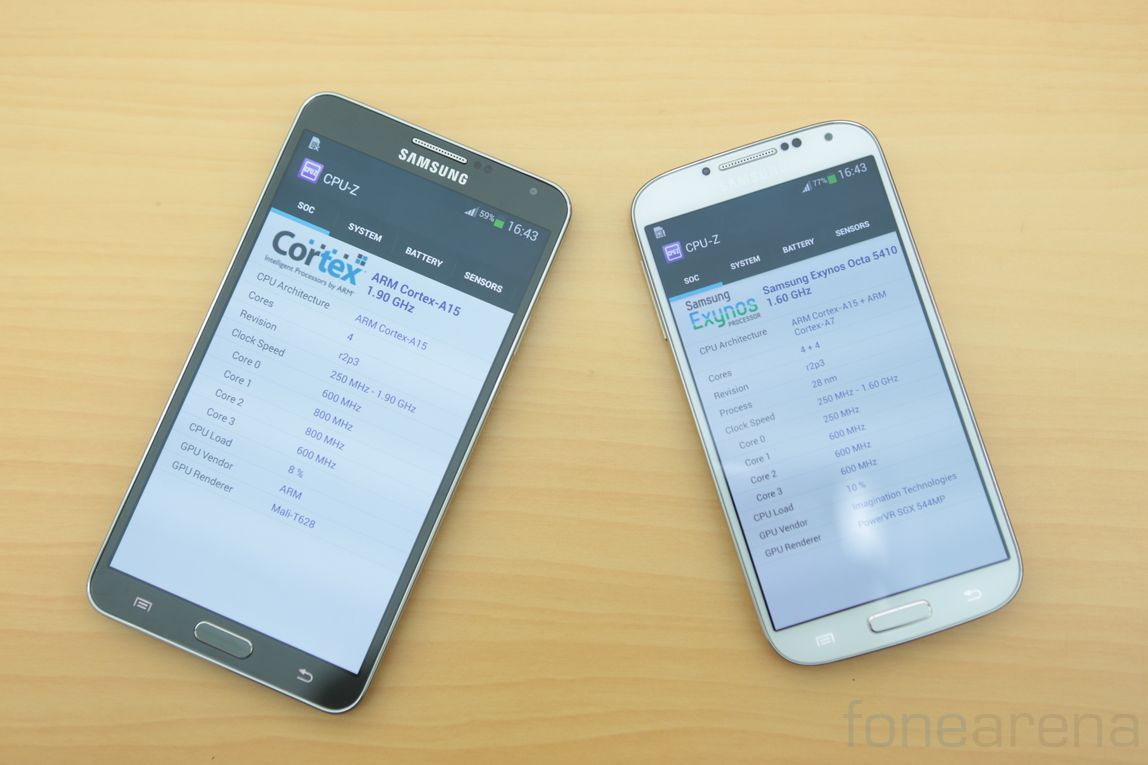 Samsung Galaxy Note 3 and Galaxy S4 are available in 16/32/64GB variants(we have the 32GB Note 3 and 16GB S4 variant). Out of the 32GB, Galaxy Note 3 has 24GB available while the Galaxy S4 has only 8.9GB user accessible memory. Both the devices have a microSD card slot. 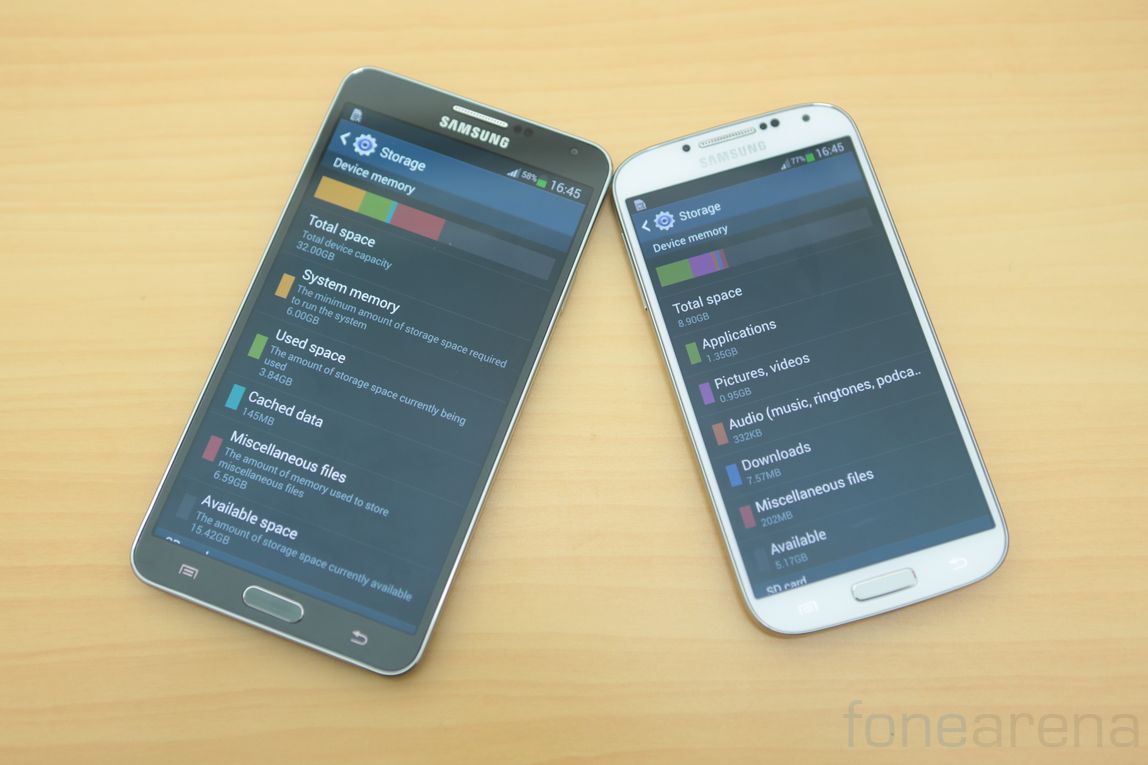 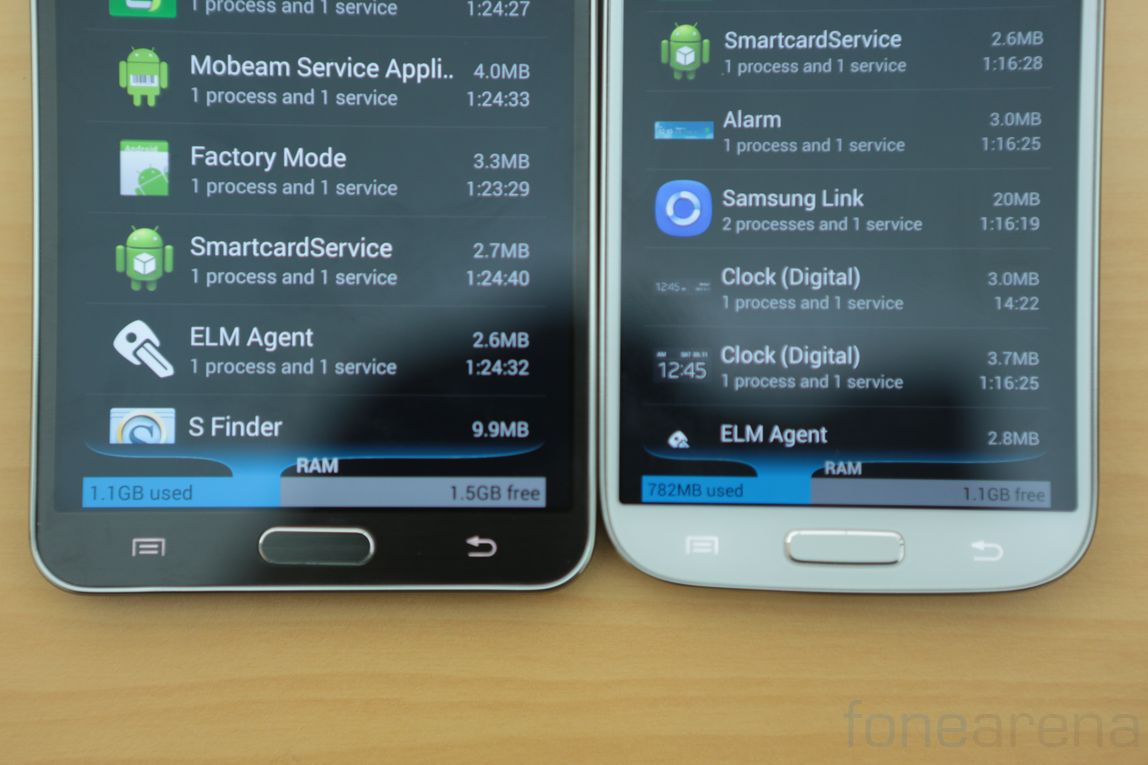 In terms of day to day performance, both the phones are quite snappy and there is hardly a moment you will notice any difference between the two.
In benchmarks, the Samsung Galaxy Note 3 outdid the Galaxy S4 in all the benchmarks.
Camera
The Samsung Galaxy Note 3 has seen a camera upgrade from the Galaxy Note 2 with a 13MP camera at the back and a 2MP camera at the front. Galaxy S4 too had the similar update from Galaxy S3 and now has the same combination with 13MP camera at the back and 2MP snapper at the front. Both the phones are capable of recording 1080p videos from the rear camera and front cameras. However, only Galaxy Note 3 can record 1080p videos at 60fps. The international variant(Exynos version) misses out on 4K video recording which is there in the LTE variant(Snapdragon 800). 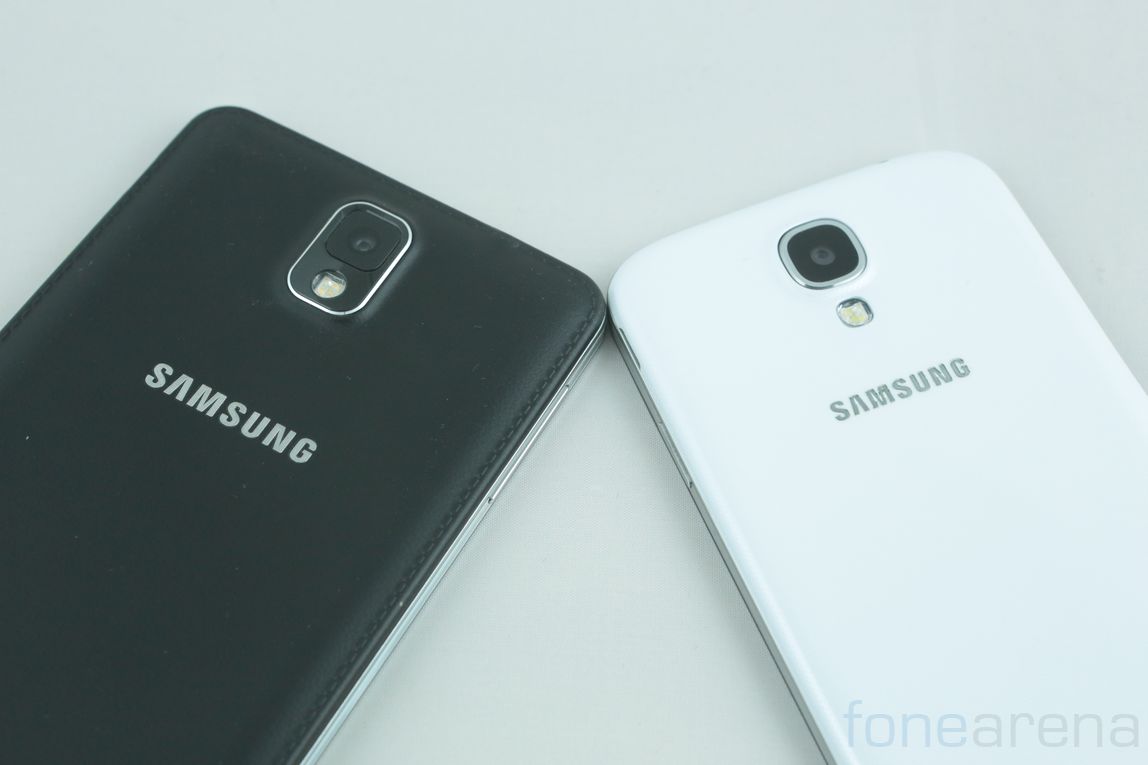 In terms of camera UI, both the phones are exactly similar with the same camera application. Samsung Galaxy Note 3 has a couple of extra shooting modes Surround Shot and Golf Mode which are not there on the Galaxy S4, but Galaxy S4 comes with a Night mode which is not there on the Galaxy Note 3. Both the cameras have HDR, Panorama, Best face, Best photo, Sports Mode, Eraser Mode, Animated Photo, Drama Mode and Sound&Shot mode. 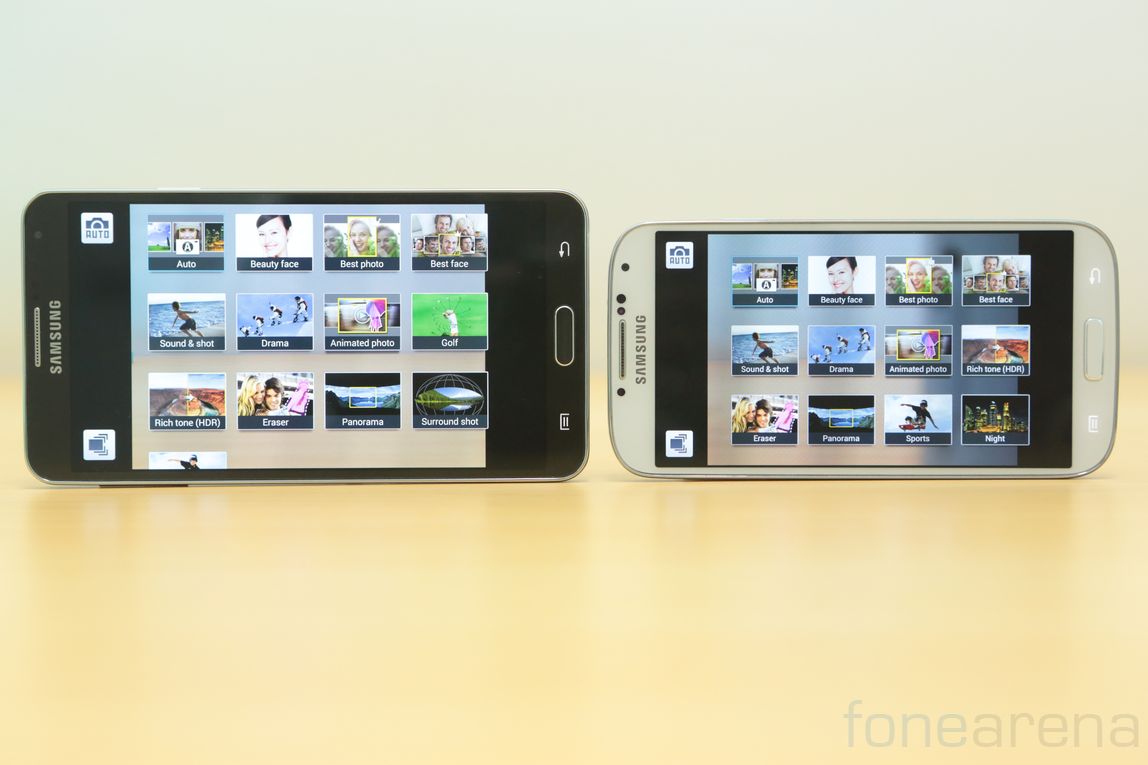 The image quality is quite similar on both the phones. You can check out the camera comparison video between the two phones right below.

Software features
Samsung Galaxy Note 3 and Galaxy S4, both have the same TouchWiz UI, but Note 3 runs on Android 4.3 while the Galaxy S4 runs on Android 4.2.2 Jellybean(Samsung Galaxy S4 recently got an update to Android 4.3 JellyBean). Both the phones are packed with Samsung features like Smart Stay, Smart Rotation, S-Beam, Multi-windows, Airview, Pop-out videos, Air Gesture, Smart Scroll and Smart Pause. The main distinguishing feature of the Galaxy Note 3 is its S-Pen stylus that lets you perform a lot of creative functions. It is a great tool for note taking when combined with the new enhanced S-Note application. There is also an Action Command option pops up allowing the users to access basic S-Pen functionalities with the click of a button on the S-Pen. 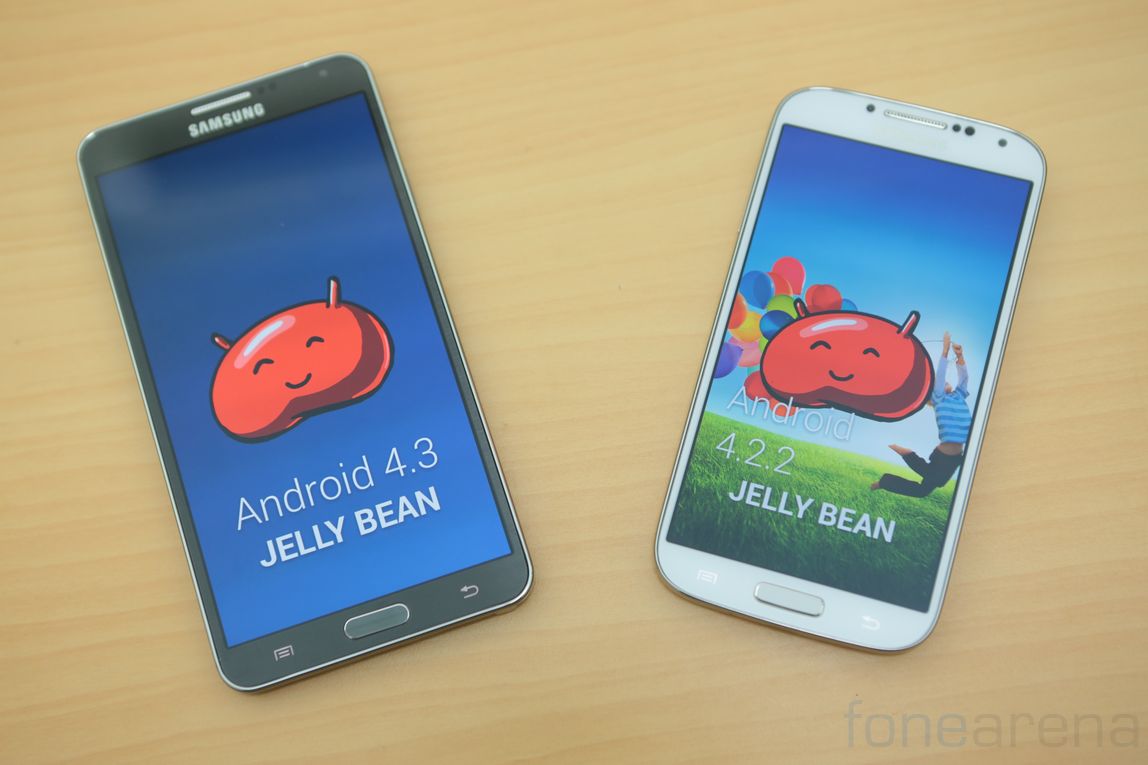 The new set of software features in Samsung Galaxy Note 3 start with the enhanced S-Pen functionality. As soon as you take out the S-Pen, an Air-command menu appears on the screen(this can be opened by pressing the button on the S-Pen as well) and it lets you one of the five actions – Action Memo, Scrap Booker, Screen Write, S-Finder and Pen Window. Action Memo lets you take notes and use these notes based on their content, Scrap Booker lets you save content from the screen, Screen Write lets you write on the screen, S-Finder helps you find files within your device and Pen Window is the best of all that lets you create a window of any size on the screen and fits certain apps inside it. It can be great for multi-tasking. To know more about the software features of Galaxy Note 3, check out our video below. 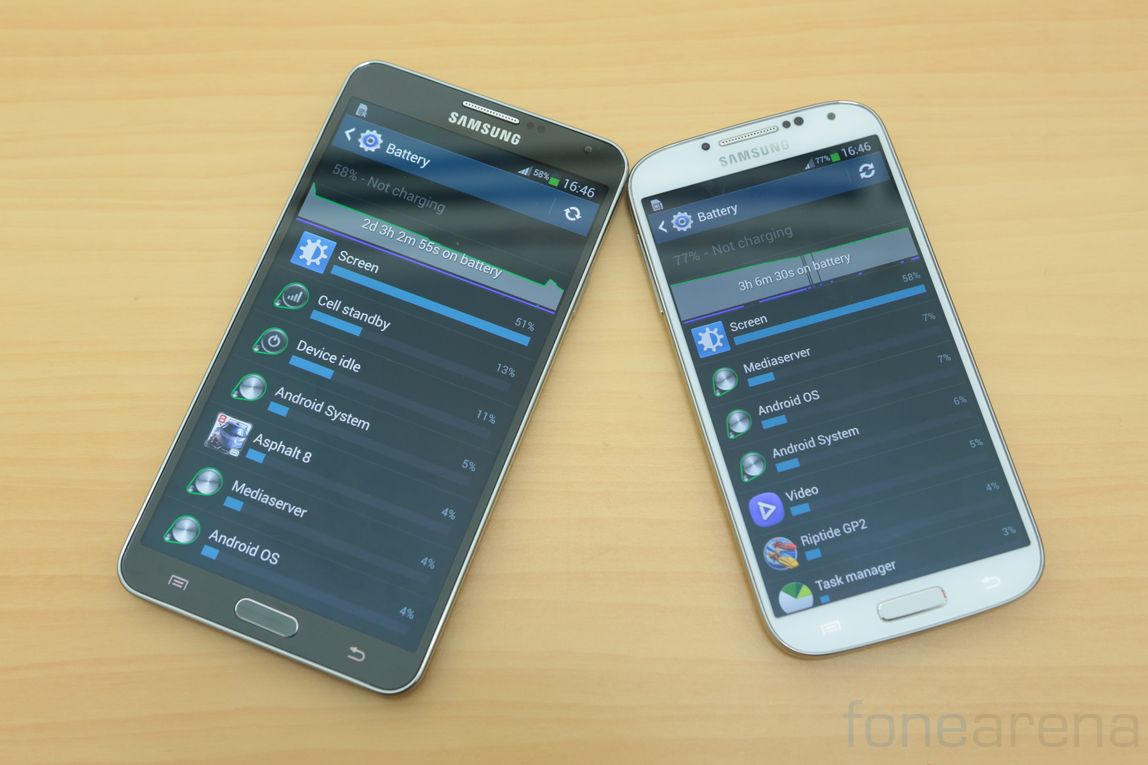 In terms of connectivity, both the devices are equipped with features like WiFi (802.11 b/g/n/ac, Bluetooth, 3G, NFC, DLNA, WiFi Direct and microUSB(MHL) connectivity. Galaxy Note 3 is the first device to come with USB 3.0 port which supports better speeds. You can check out the USB 3.0 connectivity demo video right below.

Conclusion
Samsung is the only manufacturer with two flagship devices in the market and both of these smartphone sell out like hot pancakes. Samsung Galaxy Note 3 and Galaxy S4 come with top of the shelf specifications with the best processor, best displays, but with unique selling points. Galaxy Note 3 is currently available in the market for Rs. 46,990while the Galaxy S4 retails for Rs.38,500. 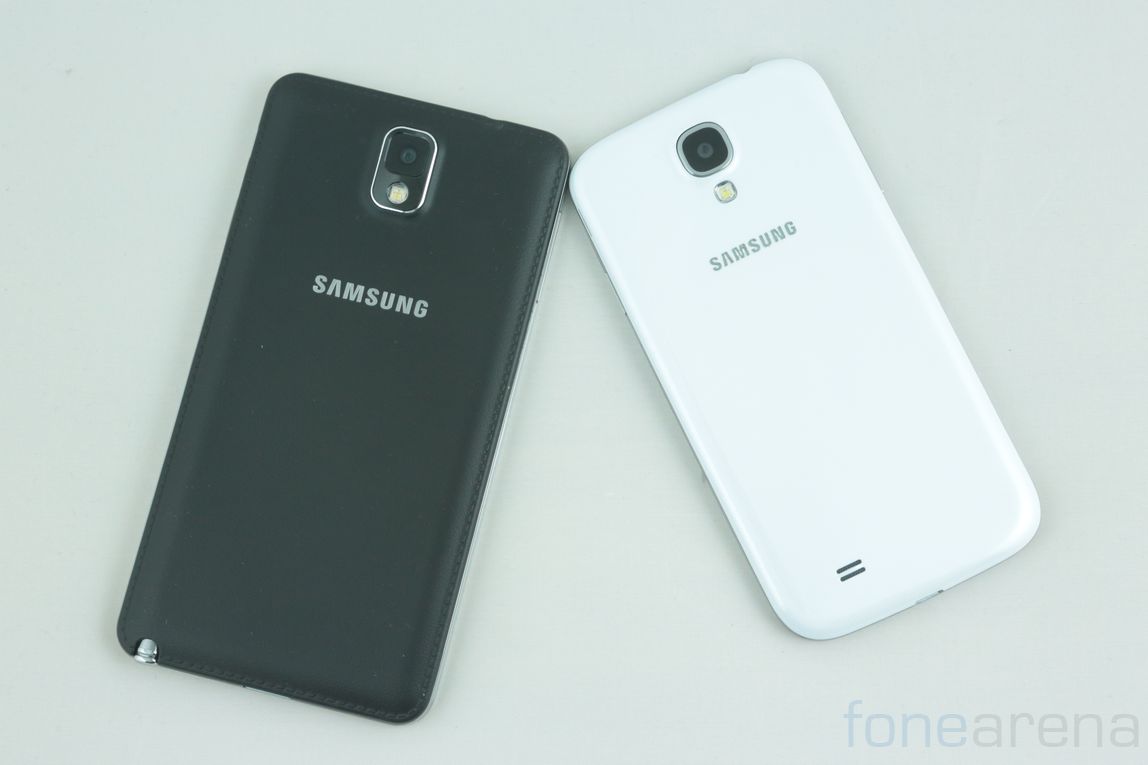