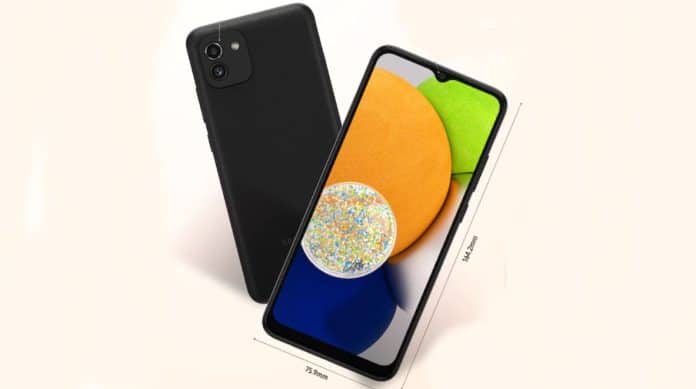 Samsung has made the Galaxy A03 official. The phone’s price and availability are yet to be confirmed, but specs have been given in an infographic. With a little chin at the bottom, the phone will have a waterdrop-style notch display. A twin camera system is placed in a square camera module on the rear. The flash sits alongside two sensors that are stacked one on top of the other. The Galaxy A03 is available in three colour variants and boasts a 48-megapixel main rear camera.

Aside from price, there is no information on availability, however, Samsung has said that availability may vary by market. The Galaxy A03 is available in Black, Blue, and Red.

The Galaxy A03 is said to have a 5,000mAh battery that will keep the lights on for an extended time. The phone is expected to be 164.275.9×9.1mm in size and will support Dolby Atmos, according to reports.

The Samsung Galaxy A03 includes a textured rear panel and a waterdrop-style notch. On the right edge, the volume controls may be seen. The phone has rounded corners and a flat-edged display surface, as well as slight side bezels.