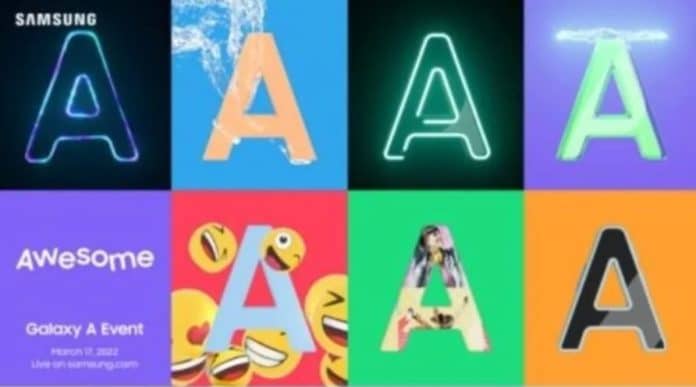 Samsung has scheduled a Galaxy A series event for March 17; the Galaxy A53 and A73 are expected to be launching.

Samsung just unveiled the Galaxy S22 flagship series, and now the brand is gearing up for its second launch event of 2022. Samsung has scheduled a new Awesome Galaxy A Event on March 17th to reveal new Galaxy A smartphones. Here’s what to look forward to at the forthcoming Samsung event.

This week marks the launch of the Samsung Galaxy A

Samsung’s Galaxy A Event will be held online and will begin at 10 a.m. ET (7:30 p.m. IST) on March 17. It will be shown live on the company’s YouTube account as well as the Samsung Newsroom. According to the manufacturer, the Galaxy A smartphones would provide “the fully-loaded experience that people want from a smartphone.”

However, there are a few hints in the teaser provided on Twitter. The short teaser video shows the letter “A” in several configurations, each of which hints at some of the device’s characteristics. While one “A” is underwater and suggests support for an IP certification, another “A” suggests the elegant design of the next Galaxy A phones. Here’s a peek at the teaser, which is attached:

Awesoooooooome A is coming!
Join us for the Galaxy A Event on March 17, 2022. #SamsungEvent

It is expected that Samsung will unveil the anticipated Galaxy A53 and Galaxy A73 smartphones during this week’s presentation. These two will join the newly announced Galaxy A13 and Galaxy A23 phones.

The Galaxy A53 and A73 might be capable mid-range smartphones. Having said that, we have yet to receive substantial information on the upcoming Galaxy A phones. As a result, it is preferable to wait until the March 17 event to obtain a clearer sense. Please share your predictions for the Galaxy A event in the comments section below!