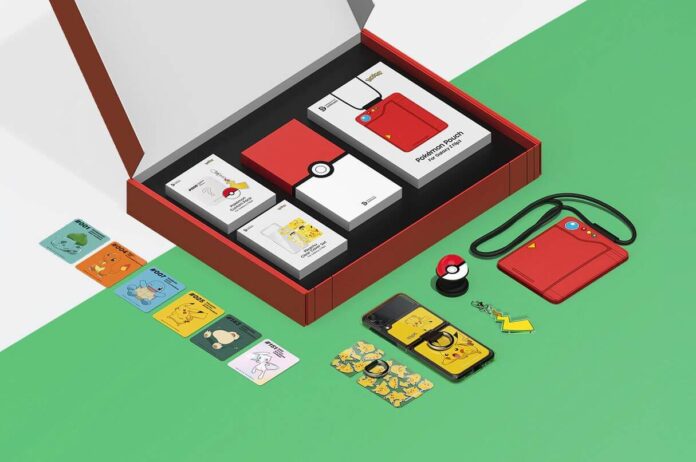 As another effort at themed smartphone editions, Samsung has released a new special Pokemon Edition of the Galaxy Z Flip 3. This one has Pokemon-themed features throughout, including the folding phone. It joins the company’s other special edition phones, such as the Bespoke Galaxy Z Flip 3 and the BTS-themed Z Flip 3. Take a peek at it.

The Galaxy Z Flip 3 Pokemon Edition has been released.

In South Korea, a new special version of the Galaxy Z Flip 3 has been announced, which comes in a large hamper. This kit contains a black foldable phone, a Pikachu transparent cover set with stickers (that can be personalised), a Pokemon purse with a lanyard strap, a Pikachu keychain, and a Pokemon custom pack, and a Poke Ball-shaped stand.

In addition to the Pokemon-themed gift package, consumers may download Pokemon-inspired themes, wallpapers, and ringtones. The Galaxy Z Flip 3 Pokemon Edition is already mentioned on the company’s website, but more information will be available in a few days.

There’s also no information on cost or availability as of yet. Furthermore, we don’t know whether or not this allegedly limited edition version of the phone will be available in other countries.

While the outside of this special edition Galaxy Z Flip 3 is changed, the hardware stays the same. As a result, you’ll get a clamshell design with a 6.7-inch Dynamic AMOLED 2X display (when opened) and a 1.9-inch AMOLED secondary display on the outer cover. The primary display has a refresh rate of 120Hz.

It is equipped with a Snapdragon 888 mobile platform, 8GB of RAM, and 128GB of storage. On the camera front, there are twin 12MP rear cameras and a 10MP selfie shooter. It boasts a 3,300mAh battery with 15W rapid charging, IPX8 water and dust protection, 5G support, and other features.

So, where can you get the new Pokemon Edition of the Z Flip 3? Let us know what you think in the comments section below!