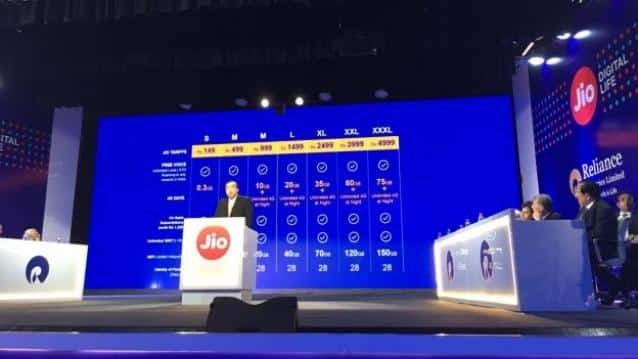 Mukesh Ambani, yesterday, took to the stage to announce the tariff plans for the upcoming telecom operator, Reliance Jio. The plans by the latest company to enter telecommunications industry did not focus on the talk time, free minutes, validity or call rates. Instead, the plans focused primarily on data, which makes sense as the network is VoLTE based where even the voice is transmitted over data. To make things, even more, simpler, Reliance Jio has made voice calling free as Ambani confirmed that Jio users would never have to pay for voice calls. The company is banking on data as the propelling force for its services and has claimed that the data charges are the lowest in India at Rs 51 per GB.

The plans provided by Jio range from Rs 19 all the way up to Rs 4,999, covering everyone from the most casual users, who would want to use data occasionally, to very heavy users. During the announcement, Ambani also introduced his plans to tie up with universities and other educational institutions in India to provide wireless data connectivity to students.

Ambani further announced that students would get 25 percent additional data on the mentioned plans when they produce their Student ID card. He also pointed out that the data prices are optimised to Rs 51 per GB and with more usage of the data the prices can be optimised further to the Rs 33 per GB if we keep in mind the data offered in Jio-Fi (JioNet Hotspot).