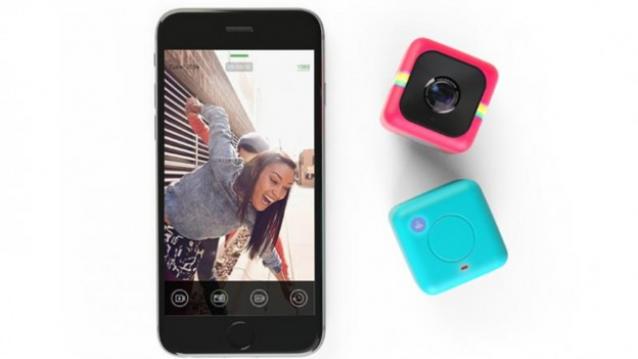 Polaroid has launched a new wireless camera called Cube+, the successor to its Cube pocketable camera which features a built-in Wi-Fi. The device will be available starting August for $149.99 and the pink and glow-in-the-dark green versions of the original Polaroid Cube will be available for $99.99.

Apart from the built in Wi-Fi, the 1.34 x 1.34 inch Polaroid Cube+ connects with smartphones as well as tablets using the  Polaroid Cube+ app for iOS and Android. Users can control their Cube+ cameras and upload and share media with friends. The camera packs in an 8MP sensor which is a significant upgrade from the 6MP sensor seen previously on original Cube camera.

According to a report by Mashable, the Cube+ doesn’t appear to have any upgraded imaging optics. The report also pointed out that it still includes a 124-degree wide-angle lens that records up to 90 minutes of continuous video at 1080p full HD resolution. In other features, the Polaroid Cube+  is splash-resistant up to 6.5 feet, includes a microSD card slot which can be expanded up to 32GB.

According to an earlier report, Polaroid Cube was launched during CES last year at $99. There’s a 120-degree wide-angle lens that can capture HD video in 720p and 1080p resolution, and still images up to 5 megapixels. It’s also waterproof up to 2 meters and shockproof. There’s an opening at the back, which contains 2MB of internal storage and a micro SD slot to expand the storage up to 32 GB.

There’s only one button on the device. Single click to capture still photos and double click to start capturing a video. The dice is embedded with magnets so it can be mounted on most metal surfaces such as a handlebar of a cycle. You can also buy separate mounts that range from $10 to $40. There’s a Bike Mount for easy mounting onto handlebars, and a Waterproof Case with suction mount that extends the two-meter waterproofing to an incredible 10 meters below the surface. The suction mount can attach to any flat, smooth surface such as a surfboard.