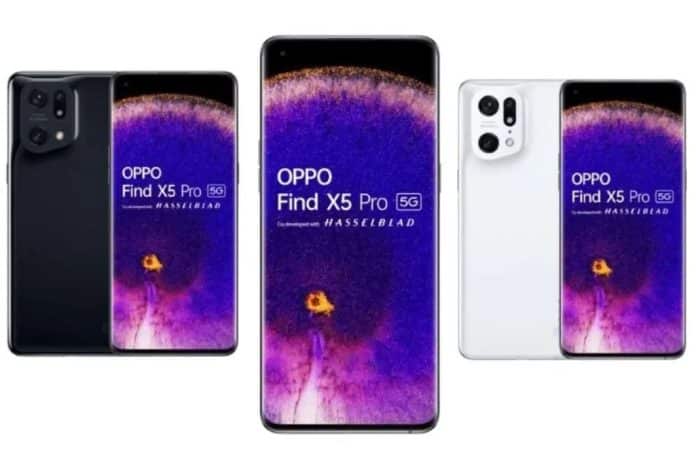 Oppo Find X5 Pro 5G: In the first half of this year, Oppo plans to release its next-generation smartphone, the Oppo Find X5 Pro, as part of its flagship Find series. The device’s renderings first surfaced online last year. Now, the Find X5 Pro’s complete specifications and features have been leaked, revealing practically everything about the smartphone. So, let’s look at the specifics.

The Oppo Find X5 Pro has been fully leaked.

According to a recent claim from the German website WinFuture, the Smartphone would cost more than €1,200 (about Rs 1,02,000) in European countries and will have flagship-level features like the Snapdragon 8 Gen 1 CPU, Hasselblad cameras, an under-display fingerprint sensor, and more.

Starting with the display, the Oppo Find X5 Pro is said to include a 6.67-inch AMOLED display with a refresh rate of 120Hz and LTPO (low-temperature polycrystalline oxide) technology. It is supposed to have a screen resolution of 3216 x 1440 pixels with 10-bit HDR capability. There will also be a punch-hole in the upper left corner to accommodate the 32MP selfie camera.

In terms of cameras, the Oppo Find X5 Pro is said to include a triple-camera array at the rear, contained behind a distinct-looking camera module. According to the source, Oppo, like OnePlus, collaborated with Swedish photography manufacturer Hasselblad to build its camera system.

A 50MP Sony IMX766 primary camera with OIS, a 50MP ultra-wide lens, and a 13MP zoom lens with up to 5x zoom capabilities might all be aboard. According to the source, the Hasselblad-branded cameras on the Find X5 Pro will be driven by Oppo’s in-house MariSilicon X Imaging NPU, which will further enhance photographs utilising AI technologies.

The smartphone will be powered by the newest flagship-grade Snapdragon 8 Gen 1 SoC, together with 12GB of LPDDR5x RAM and 256GB of UFS storage. A 5,000mAh battery with wireless charging and 80W wired fast charging capabilities, similar to the previous OnePlus 10 Pro, might potentially be included. The majority of the specifications appear to be identical to its sibling brand’s current flagship model! The gadget will come pre-installed with the Android 12-based Color OS 12.1 operating system.

Aside from that, the Find X5 Pro will have a 5G connection, Bluetooth 5.2, and Wi-Fi 6E. It’s believed to have an in-display fingerprint sensor, Dolby Atmos-compatible dual speakers, IP68 certification, and two colour options: Ceramic White and Ceramic Black.

For the time being, this is all we know about Oppo’s future flagship smartphone, the Find X5 Pro. It’s worth noting, though, that this information isn’t official. We haven’t gotten any definite information or an official launch date yet, but we anticipate Oppo to do so in the next few days.