OnePlus One to sell without ‘invite-system’ in India, only tomorrow 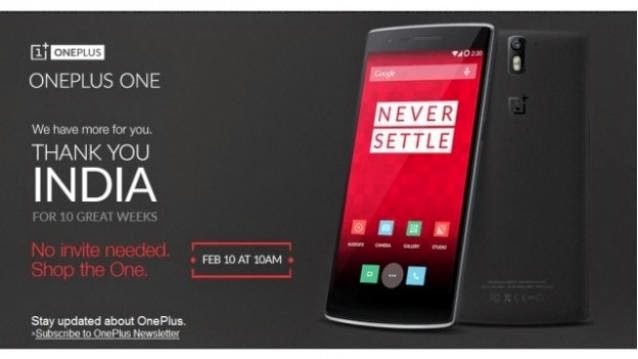 OnePlus One, which was launched in India in December last year and completes its 10th week, will be selling its famed OnePlus One smartphone on Amazon India tomorrow, without any invite system.

We all have a reason to celebrate. You will too. Visit @amazonIN on February 10: http://t.co/9cFkResGhp pic.twitter.com/HLswzZIUjE
— OnePlus (@oneplus) February 7, 2015

In a tweet, sent out by its official account, OnePlus has thanked the Indian consumers for ’10 great weeks’ and said that the company will sell a limited quantity of OnePlus One handsets from 10 am onwards tomorrow. Unlike the regular sale model, for tomorrow, you don’t need any OnePlus invite to buy the smartphone.

Amazon or OnePlus have not revealed the number of handsets that will be up for grabs tomorrow, but the quantity would be limited and the sale will only last till stocks remain. So if you want to get the OnePlus One, ensure you log in from 10am onwards.

Also OnePlus One has announced that it will launch its own ROM – OxygenOS – quite recently. Since this ROM is expected to come atop Android 5.0 Lollipop OS, the OnePlus One handset sale will be interesting to follow. It’s not yet clear when OxygenOS will be rolled out to India users.

OnePlus claimed that it had sold close to 1 million handsets of the ‘flagship killer ‘OnePlus One by the end of 2014. It had also come out with its report card for 2014 which put India only behind the US in terms of forum users. Also India makes up 7 percent of the entire global market for OnePlus.