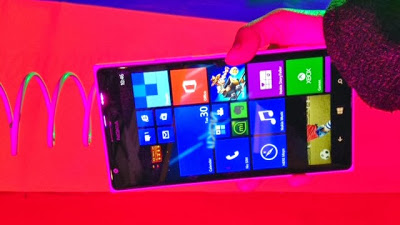 Nokia has finally taken the wraps off the off its first Windows Phone phablet for the Indian market, the Lumia 1520, at an event held in Delhi. The 6-inch device has a full 1080p full HD display, 20-megapixel PureView camera and a new Nokia Camera app. The Lumia 1520 is priced at 46,999 and will be available from today onwards.

Much like the other phones in the Lumia series, the polycarbonate shell of the phone will come in a multitude of colours. The phone runs on the latest Windows Phone OS with the GDR3 update. This has added a third column to the Live Tiles feature on the Lumia device. This third column will definitely help users to see and do more on the larger screen. One of the key points that the company focussed on was the presence of four built-in microphones, for better audio capture.

Under the hood, one will find a quad-core Qualcomm Snapdragon 800 processor clocked at 2.2GHz, coupled with 2GB of RAM. The 1520 comes with 32GB of internal memory, which can be expanded up to 64GB via a microSD card slot. The 20-megapixel camera on the phone is one of the highlights and Nokia has added a bunch of new features to the Nokia Camera app as well as the Pro Camera app. This is in addition to apps such as Nokia Refocus and the suite of Nokia Lenses.

Take a quick look at the specifications:

Nokia will be entering a market that already has the likes of Samsung Galaxy Note 3, Sony Xperia Z Ultra and the HTC One. How will Nokia’s first Windows Phone 8 phablet fare against these rivals? We’ll bring you all the comparisons and coverage from the launch through the day. For now, see our specifications review of the Nokia Lumia 1520.