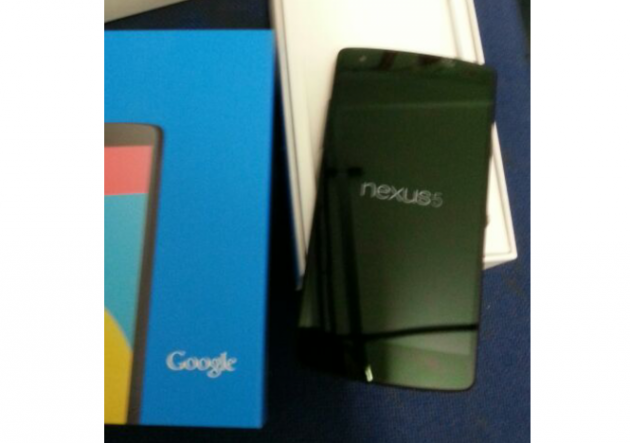 Google – the cat’s out of the bag. We’ve already seen full press images for the Nexus 5. We already know the price. We already suspect it will run Android 4.4 KitKat. And worse, we’ve been teased to oblivion over the past few weeks. Can you just announce the phone already? To make matters worse, today, we’re being teased yet again, and this time it’s a photo of the Nexus 5 sitting outside of its box.
There’s not much to see here, other than the “Nexus 5″ splash screen on the phone, and a box that appears to be very similar to that of the Nexus 7. The design lines right up with earlier leaks and the published press images, so we’re apt to believe this is the real deal, despite the super low-quality shot.

Expectations still remain the same. We’re betting on a 5-inch 1080p display, a Snapdragon 800 processor, an 8-megapixel camera and whatever Android 4.4 KitKat tosses our way. Rumors pinpoint a possible announcement tomorrow, October 31. Fingers crossed we don’t get this sort of constant baiting before the Nexus 6 launch.