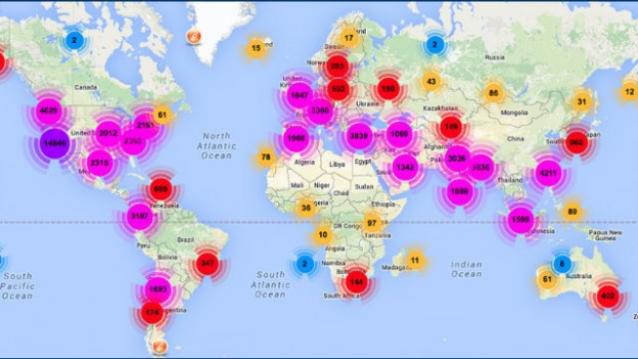 Researchers on Sunday released a Japanese version of an Android app that takes information from smartphones to detect earthquakes and eventually warn users of impending jolts from nearby quakes.
Developed by a team from University of California, Berkeley (UC Berkeley), the app called MyShake is available through the Google Play Store which can be accessed via the MyShake website. It runs in the background and draws little power, so that a phone’s onboard accelerometers can record local shaking any time of the day or night. For now, the app only collects information from the accelerometers, analyses it and, if it fits the vibrational profile of a quake, relays it and the phone’s GPS coordinates to the Berkeley Seismological Laboratory in California for analysis.

Since it was first released in English on February 12, more than 170,000 people have downloaded the app from around the world, and on any given day 11,000 phones provide data to the system. “We think MyShake can make earthquake early warning faster and more accurate in areas that have a traditional seismic network, such as Japan, and can provide life-saving early warning in countries that have no seismic network,” said Richard Allen, director of the Berkeley Seismological Laboratory and professor and chair of UC Berkeley’s department of earth and planetary sciences.

Once enough people are using the app and the bugs are worked out, UC Berkeley seismologists plan to use the data to warn people miles from ground zero that shaking is rumbling their way. “In my opinion, this is cutting-edge research that will transform seismology,” said UC Berkeley graduate student Qingkai Kong, who developed the algorithm at the heart of the app. “The stations we have for traditional seismology are not that dense, especially in some regions around the world, but using smartphones with low-cost sensors will give us a really good, dense network in the future,” he added.

Spanish and Chinese versions of the app will be released soon and MyShake will also be available for the iPhone in the near future.

In a paper published in the journal Science Advances, the researchers had described the algorithm in the mobile app that analyses a phone’s accelerometer data and distinguishes earthquake shaking from normal vibrations, such as walking, dancing or dropping the phone. In simulated tests, the algorithm that the researchers developed successfully distinguished quakes from non-quakes 93 percent of the time.