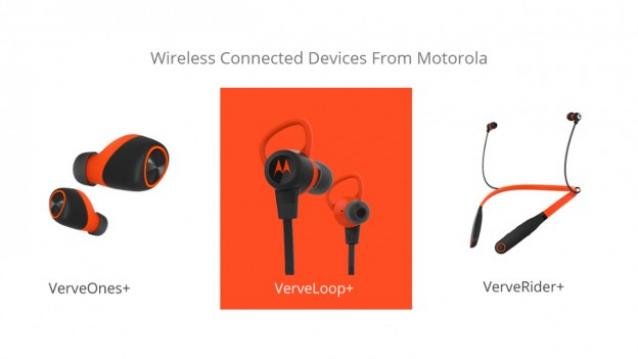 The dust hasn’t even had time to settle around Apple’s AirPods and manufacturers are already taking pot-shots at them. The latest company to do so is Motorola with their VerveLife series of wireless earbuds.

If you remember Motorola’s recently announced Moto Z handsets, they dumped the 3.5mm headphone jack in an attempt to beat Apple to the punch. Those handsets didn’t have an official wireless earbud option, until now.

The VerveLife series consists of the VerveOnes+, VerveOnes, VerveRider+, VerveRider and VerveLoop+.
The ‘+’ models in this lineup are all IP57 certified, which means that they’re water and sweat resistant. The remaining models are not certified to be water resistant, but their design remains largely the same.
The VerveOnes+ and VerveOnes are, like the AirPods, not connected to each other via a cable, and come with their own charging case. Motorola claims that with the case, these earbuds will offer about 12 hours of battery life.

A nice feature that Motorola has thrown in is the “last-connected location” of these earbuds being displayed on Google Maps. If you lose these ‘buds, you simply open the VerveLife app and you’ll see where you last used them.