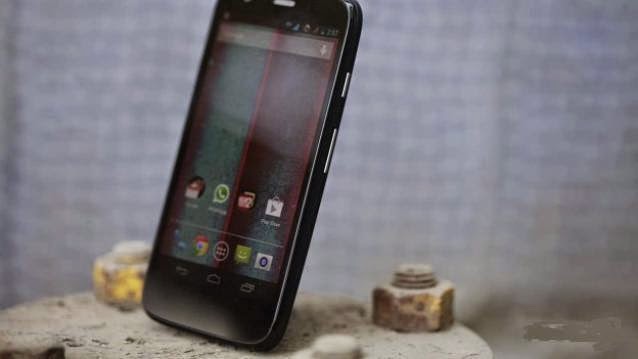 Motorola is set to launch a sequel to last year’s Moto G on September 10th, according to a report by GSMArena. The successor’s name is still a secret, but it’s been given the G2 moniker to indicate an update to last year’s model. The information is said to have come straight from a Motorola representative who has also said that the Moto G2 will be priced at around €250 (around Rs 20,000). That’s nearly double the price of the Moto G, but don’t let that put a damper on its appeal – the Moto G2 packs quite a punch just like its predecessor.

The Moto G2 will feature a larger, 5-inch 720p display. This is a jump from the Moto G’s 4.3 -inch display, though the resolution remains the same. Motorola has chosen to use the same quad core 1.2GHz Snapdragon 400 processor with 1GB RAM and a Cortex-A7 CPU. This means the the Moto G2 should be just as nippy as its predecessor, though we must admit to be disappointed with the choice of SoC.

There’s no word on the battery capacity yet, though we can expect a minimum 2070 mAh Li-Ion battery we saw on the Moto G. If it does pack the same battery, you can expect more than a day’s worth of juice as with the Moto G. Motorola has upgraded the camera, which is now a 8MP one on the rear and a 2MP snapper on the front for video chats. The Moto G2 will come with Android 4.4.4 Kitkat out of the box.

Just like the Moto G, the Moto G2 will be a dual-SIM smartphone and is expected to come with 8GB of built-in storage. Motorola may choose not to allow users to expand this, as with the original Moto G. The price might make people wary about choosing this Lenovo-backed Moto G2, considering it now has stiffer competition from smartphones such as the Xiaomi Mi3 and the Asus Zenfone 5.

It’s not clear if the Moto G2 will run stock Android, as Motorola is now backed by Lenovo and not Google, but we find it hard to see Lenovo making such a drastic change, once the acquisition gets regulatory approval, which has yet to happen. The fact that last year’s Moto G ran on stock Android was a key selling point for Motorola and we hope that the Moto G2 will follow suit. There’s no official word from Lenovo about G2′s launch, although GSMArena says that some retailers may get the handset as early as the end of August.