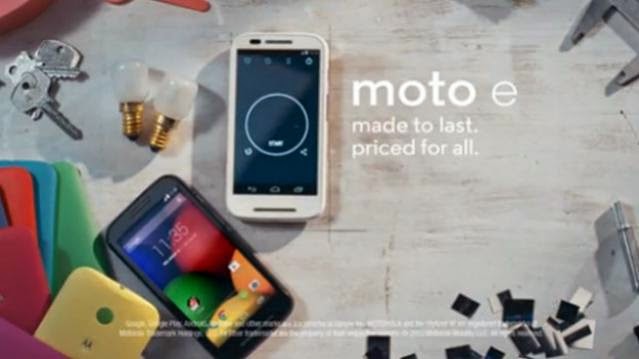 As promised, Motorola has launched the ‘price for all’ Moto E in the Indian marked for Rs 6,999. Just like the Moto X and Moto G, the budget smartphone will be available exclusively via Flipkart starting tonight. Its spec sheet could put any  sub-Rs 7,000 budget Android phone to shame.

Moto E is a watered down version of the Moto G. It gets a slightly smaller 4.3-inch qHD display, and a pixel density of 256 ppi. The rugged device comes with waterproof capabilities, and the display is scratch-resistant. The device will come dipped in nine colours, and one can customize it with Motorola shells. Take a look at the interesting video below introducing the Moto E:


Under the hood, it is powered by a dual-core Snapdragon 200 processor clocked at 1.2GHz coupled with 1GB RAM. As expected, the Moto E runs Android KitKat 4.4 and the Motorola also guaranteed future updates. It maintains the 5-megapixel rear camera. Sadly, it has given the front-facing camera a miss.

On the storage front, it gets 4GB internal memory that is expandable using a microSD card slot. There is no word on the maximum expandable memory, but it should be up to 32GB. The connectivity options include 3G, Wi-Fi and GPS. Besides, the Moto E is expected to come a 1980mAH battery that promises all day battery life.