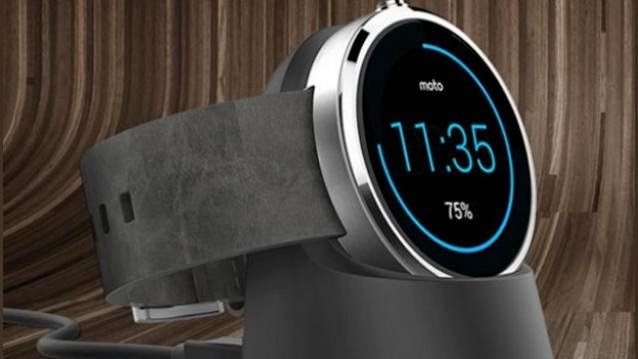 Motorola’s highly anticipated Moto 360 was finally launched in India earlier this month. Speculations around the pricing continue as Motorola didn’t announce the price and said it will be disclosed once the device hits store shelves later this month. Looks like, we won’t have to wait too long as the nifty smartwatch is now listed on Flipkart.

It is known that Motorola has signed another exclusive tie-up with Flipkart for its new range of devices in India. The second generation Moto G is already available and the Moto 360 was expected to hit store shelves by the end of the month. However, the Flipkart page simply states “Coming Soon” and doesn’t specify any exact shipping dates. Users can key in their email addresses and Flipkart will notify them once the device is available. The Moto 360 runs Google’s Android Wear, especially crafted for smartwatches and offers compatibility with devices running Android 4.3 and higher.

The highlight of the device is its circular display, which has compelled LG to quickly launch the G Watch R with a round display close along the heels of the Moto 360 launch. It sports a 1.56-inch Backlit display and comes with a 320 x 290 resolution that goes up to 205ppi. It also gets a layer of Corning Gorilla Glass 3.

At the core of the wearable, it is powered by the TI OMAP 3 processor coupled with 512MB RAM. It also gets 4GB internal memory. For tracking activities, it is fitted with a pedometer and optical heart rate monitor (PPG). The IP67-certified Moto 360 is water-resistant and also supports wireless charging.
The support for voice control makes it easy to get things done, even when your hands are full. Users can send texts, set a reminder, check the weather, and even ask for directions by saying ‘Ok Google’.

The Moto 360 will be competing with the current top-dogs in the smartwatch market – LG G Watch R  and Samsung Gear Live.  However, the pricing may play a crucial role in determining its fate. Going by Motorola’s track record, we expect the device to be priced aggressively, instead of the rumoured Rs 15,000 price tag.

Besides, news also has it that Motorola has now re-branded its touchless gesture support as Moto Voice. The app has been updated to bring the features found in the second generation Moto X to the original Moto X device.