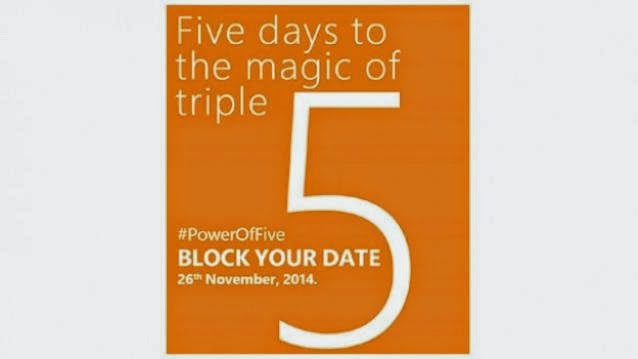 Microsoft will launch the company’s first branded smartphone, ‘Microsoft Lumia 535′ at an event today in India.

The invitation read as, “Five days to magic of triple 5.”

What’s our guess based on? The Lumia 535 is said to feature a 5 inch screen along with dual 5MP rear and front facing camera. Basically three features that have the number 5 associated with them.

The Microsoft Lumia 535 will sport a 5-inch IPS LCD display with a 540×960 pixels resolution with 220ppi. It will be powered with 1.2GHz quad-core processor paired with 1GB RAM. The smartphone has an internal storage of 8GB which can be further expanded up to 128GB via microSD card.

The Microsoft Lumia 535 also has another variant which will come with the same set of specifications except that it also has Dual-SIM support. The smartphone is rumoured to have a price in the range of Rs 8000 to Rs 10000.

Microsoft said the new phone will offer the same services that its high-end phones do. This means Skype video calls, Office apps and the virtual assistant Cortana should be there.

This Microsoft Lumia 535 will be the first smartphone to feature the only Microsoft brand name and doesn’t mention Nokia, who were originally listed as the makers under the Lumia brandname.