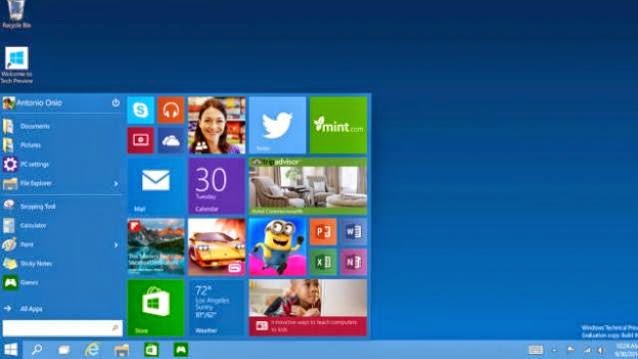 San Francisco: Microsoft is trying to soften an unpopular redesign of Windows by reviving features from older versions while still attempting to nudge desktop users into a world of touch screens and mobile devices.

The company on Tuesday gave an early preview of the new Windows 10 software, which it aims to begin selling by the middle of next year. Although the current version is called Windows 8, Microsoft says it’s skipping ahead to Windows 10 to emphasise its effort to move forward.

Windows 8 was introduced two years ago as an answer to the growing demand for mobile devices. But many users hated it because its tablet-like design and controls weren’t a good fit for many devices using keyboards and mice. Sales of personal computers continued to fall.

With Windows 10, Microsoft is trying to regain the loyalty of longtime PC users, while reaching out to consumers and businesses that are increasingly adopting touch-screen smartphones and tablets.
Analysts consider the success of the new Windows crucial for Microsoft and new CEO Satya Nadella, who must show that Microsoft can embrace mobile devices without sacrificing the traditional computing experience.

The new system will be a blend of the old and the new. For instance, it will have various controls that are familiar to users of older Windows systems, such as a start menu to quickly access apps. But this start button will also open a series of tiles that resemble what’s found in Windows 8.

Analysts said that more gradual transition is important if Microsoft wants to persuade users to upgrade.
“This is what Windows 8 should have been,” said Carolina Milanesi, a veteran tech analyst at the research firm Kantar Worldpanel. “Here they are doing the right thing.”

Microsoft executives signaled they got that message on Tuesday. They stressed repeatedly that using the next version of Windows won’t be a challenge for businesses or consumers who have continued to use Windows 7 or even earlier versions.

The new software seeks to offer “the familiarity of Windows 7 with some of the benefits that exist in Windows 8,” said Joe Belfiore, a Microsoft executive who oversees Windows design and evolution.
He compared it to buying a new car with a more powerful engine and a better audio system, without having to “learn a new way to drive.” Windows 10, for instance, will suggest new ways to use or navigate through files, without forcing users to abandon the old way, Belfiore said.

“We’re designing the experience so that as you use it, the things you already know are familiar and present, but new value is presented to you at a rate that’s easier for you to ingest,” he said.
The effort drew tentative praise from several industry experts.

“They desperately needed to find a way to bridge that experience. I just wish they’d done that with Windows 8,” said Rob Enderle, a tech analyst with the Enderle Group.

Milanesi said that while many businesses resisted upgrading to Windows 8, they can’t avoid touch screens as younger workers are accustomed to using phones or tablets as their primary computing device.

Windows 10 will also be designed to work on a wider range of computing devices.

Microsoft currently has three main systems — Windows 8 for traditional computers and tablets, Windows Phone 8 for cellphones and Xbox for its gaming console. By unifying the underlying systems in Windows 10, software developers will be able to create apps for the various devices more easily. Consumers will also be able to switch devices more easily and avoid having to buy the same apps multiple times.

That doesn’t mean the apps will always look the same. Developers will still be able to adapt apps for the various screen sizes, but won’t have to start from the beginning for each version.
User interfaces on the various devices may also differ, even as they share underlying technologies. For now, Microsoft plans to keep the current Xbox interface on the game console.

Enderle said Microsoft’s effort to create a single platform should help lure more developers to write apps — something the company needs to boost usage of Windows tablets and phones.

Windows is the most widely used PC operating system in the world, but it is steadily losing ground as more people turn to smartphones and tablets, which primarily run on operating systems from Microsoft rivals Apple and Google. That’s why Nadella wants to create one system that will run on all devices.

“It’s certainly an ambitious goal, but it’s also a little early to tell how it will work,” said Michael Silver, a tech analyst at Gartner.

Apple and Google have both rejected Microsoft’s approach of unifying the various systems, preferring to keep systems for PCs and mobile devices separate.

Microsoft also touted new security and management features for business customers, which represent a lucrative market for the company. Almost half of all PCs are used in the workplace, according to Gartner.
While a “technical preview” version of the software is being released this week, Microsoft said it won’t be ready to talk about new consumer features until next year.

Microsoft declined to say how much the new software would cost or how it will be distributed. Analysts have speculated that the company might be considering a subscription model — as it has with Office software — rather than selling each new version of Windows separately.