Microsoft Office for iPad a hit: Word, Excel and Powerpoint are top 3 on App Store 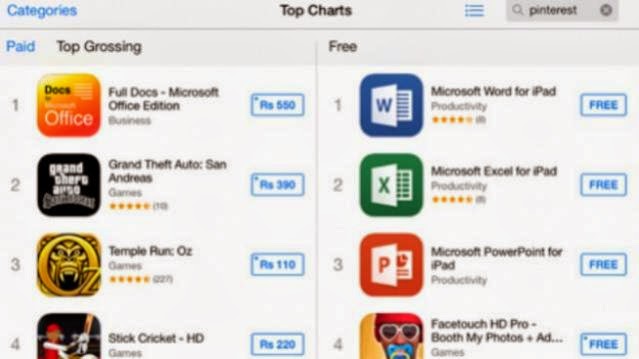 All three apps are on top of the charts. Screenshot from iPad

Microsoft today announced that it was launching the Office suite for Apple’s iPad. The Word, Excel and Powerpoint Apps have been customised for Apple’s iPad and the Apps are now available for  free. Users can read documents on the apps for free but to make edits and make other changes they will need to buy a Microsoft Office 365 Office subscription.

Within a few hours of the launch, the apps are already on top of the free apps chart on the iPad. Microsoft Word is number one, followed by Excel and then Powerpoint. Users should also note that Microsoft has made the apps completely free on iPhone and Android for those who had a Home subscription account. Users should note though that all documents saved in the 97-2003 format can’t be edited on the apps.

The response signifies that this step taken by Microsoft is a good one. Given that Apple has sold over 200 million iPads, the fact that Word was missing on the device was a big loss for Microsoft. Thankfully Microsoft’s new CEO Satya Nadella has chosen to correct that step.

In a blogpost, posted after the Microsoft event, he wrote, “We’re bringing Office, the gold standard in getting things done, to the iPad. A billion people rely on Office every day, and we’ve worked diligently to create a version of Word, Excel and PowerPoint that delivers the best productivity experience available on the iPad. It’s built from the ground up for touch, is unmistakably Office in its design, and is optimized for iPad. Office for iPad offers unmatched rendering of content and delivers unparalleled authoring, analysis and presentation experiences that Office customers expect on all of their devices. Download it today for free.”

He also noted, “We’ve offered Office on the Mac for more than 20 years. Taking the next step and making it available for iPad users too is another way Office delivers on its promise to give anyone the power to make things, and make things happen, any moment of the day.”

Nadella and Apple CEO Tim Cook also exchanged some welcome notes on Twitter. Cook tweeted saying, “welcome to the iPad and @AppStore! @satyanadella and Office for iPad.” Nadella tweeted back saying, ” Thanks @tim_cook, excited to bring the magic of @Office to iPad customers #cloud4mobile.”

Check out their Tweets below: