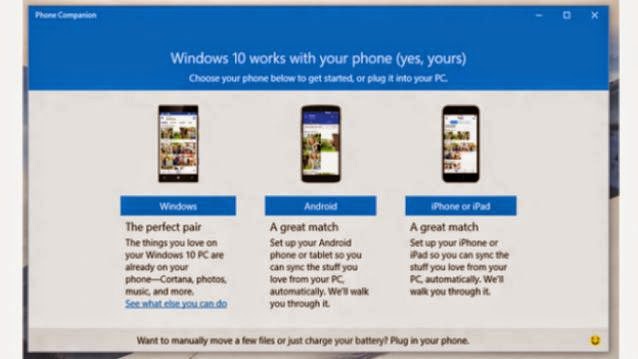 Microsoft announced that it will be adding Cortana support for the Android as well as the iOS platform. This support is part of the Phone Companion app announcement, made by Joe Belfiore via a video, to be available on Android and iOS devices, which lets them access Windows 10 content from either Windows 10 PC or Windows 10 mobile devices.


According to the Windows blog, you will need to download the companion app if you are using an Android or iOS based phone to access certain apps on your Windows 10 PC. For instance, the One Drive app installed on the phone will let you back up photos you take to the Photos app on your Windows 10 PC. Notes written on the PC in OneNote will also reflect on your phone and any note tweaked on the phone will also show up on the PC.

“With the latest upcoming version of the Music app, you’ll be able to store and access your music from OneDrive not only on your PC but now also play it anywhere, for free, on your iOS or Android phone,” says Belfiore on the Windows blog.

Cortana, Microsoft’s personal voice assistant, will also be part of this Companion app. It will come on the Android platform by the end of June whereas on the iOS platform by the end of the year. Cortana support will include notifications for sports, tracking flight schedules and most of the other features seen on the Windows Phone OS and Windows 10 versions. You will need the Phone Companion app installed on your PC to be able to download the Cortana app on your Android phone (from Google Play Store) or iPhone (via the Apple App Store).

“Everything in Cortana’s Notebook will show up across all your devices and any changes you make on one device will be reflected when you use Cortana on any of your other devices. The Cortana companion app will help you complete tasks you begin on your PC wherever you are, on your phone,” said the Windows blog.

However, this does not mean that Cortana will be able to every single thing it can do on the Windows mobile platform, because some functions require a stronger integration with the software and hardware. Features such as toggling settings, opening apps and so on will not be present in the initial versions.