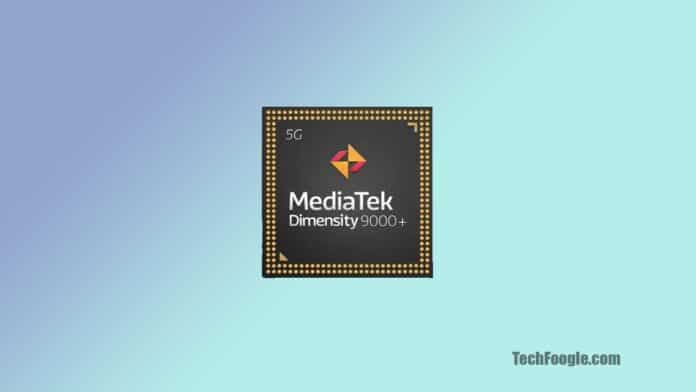 The MediaTek Dimensity 9000+ has been announced, with improved CPU and GPU performance.

To compete with Qualcomm’s ‘Plus’ SoC variants, MediaTek has introduced the new Dimensity 9000+, which primarily competes with the recently introduced Snapdragon 8+ Gen 1. The new MediaTek chipset is primarily concerned with improving GPU and CPU performance. Here are some specifics.

Details and Features for the MediaTek Dimensity 9000+

The ultra-Cortex-X2 core, which is clocked at 3.2GHz in the 4nm Dimensity 9000+ in comparison to the identical performance core’s 3.05GHz clock speed in the Dimensity 9000, is part of Arm’s v9 CPU architecture. It is claimed that this structural adjustment would increase CPU performance by more than 5%.

Three super Cortex-A710 cores (up to 2.85GHz) and four efficiency Cortex-A510 cores are also included (up to 1.8GHz). This configuration additionally contains the Arm Mali-G710 MC10, which improves GPU performance by up to 10%.

The remainder of the specifications is the same as the Dimensity 9000. The MediaTek Dimensity 9000+ is also equipped with the MediaTek Imagiq 790 ISP, which allows up to 320MP cameras, simultaneous triple camera 18-bit HDR video recording, and 4K HDR Video With AI noise reduction. The MiraVision 790 from MediaTek supports up to 144Hz WQHD+ or 180Hz Full HD+ screens. The panel also has MediaTek Intelligent Display Sync 2.0 technology and compatibility for up to 4K60 HDR10+.

For enhanced quality in AI multimedia, gaming, cameras, and other areas, the SoC is additionally supported by the 5th Gen MediaTek APU 590. The AI-enhanced variable-rate shading technology, ray-tracing creation tools, and other improvements are made possible by the MediaTek HyperEngine 5.0, which is for different gaming enhancements.

Beginning in Q3, 2022, smartphones will begin to ship with the MediaTek Dimensity 9000+. The OEMs that will introduce the first Dimensity 9000+ smartphones to the market, however, are yet unknown. Additionally, the first Snapdragon 8+ Gen 1 phones are still to come! On these improvements, we’ll keep you informed. So pay attention.