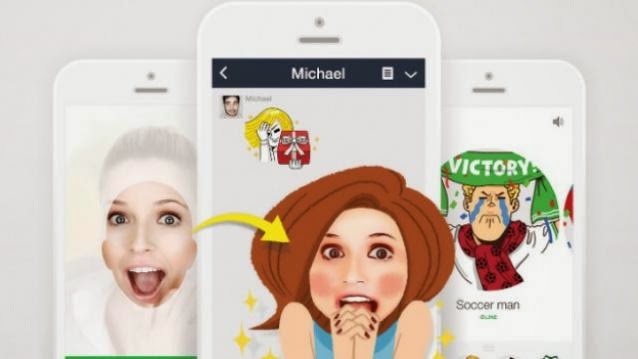 Line has a new Self Sticker app.

Line Corporation, which owns the popular Line instant messaging app, has announced a new app for smartphone users. This one is called the “Line Selfie Sticker”. This app is currently available only on iPhones and Android.

The purpose of the app is as the name suggests to help users convert selfies into a sticker. Stickers are popular alternative to emoticons that are used heavily on Line, and are even available on apps like Facebook Messenger, etc.

To convert a selfie into a sticker, users take a picture of their own face, and then they choose their favourite character from over 130 illustrations. These are characters are based on themes.

It should be noted that the app first asks you to pick a theme like ‘Career woman’ (which for some reason has sticker of an overtly teary-eyed woman) or Skateboarder or Hip Hop. Once you’ve chosen the theme, it then takes your ‘selfie,’ and after that you get to a range of sticker options within that theme with your face on it. Depending on how good or bad your selfie is the stickers are then made according to that theme. Some of them just look plain ludicrous.

Users can adjust specific aspects of the stickers by changing the face size or angle, enlarging or shrinking text, or adding speech balloons with their own messages, creating unique stickers that can be used in any situation. Be warned that the number of characters you can add in a caption is limited, close to around 14 characters (excluding line spaces).

You can then share these on Facebook, Twitter, Instagram and of course directly through the Line app if you have the button. Overall they don’t seem too bad, if you’re having a boring day at work.