With barely a few days remaining for the April 11 launch of its premier flagship smartphone, the Galaxy S5, leaked images of the S5 Zoom have emerged online. This comes close on the heels of rumours that have been circulating on the internet about S5 zoom with a high resolution camera being a real release prospect. There seems to be some truth to the fact that a Zoom model could be in the pipeline thanks to fresh images that surfaced online. 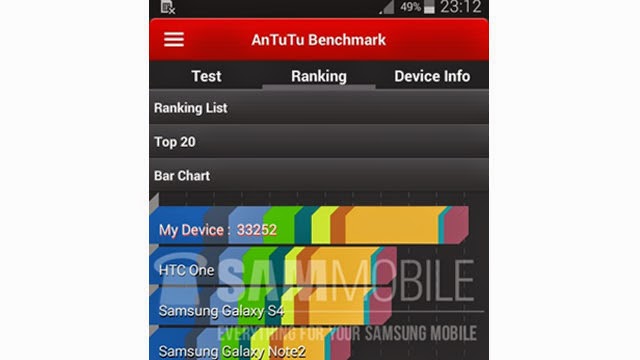 According to the images on Sammobile, the S5 Zoom seems to have undergone AnTuTu Benchmark tests. The site states that the phone will come with a 4.8 inch Super AMOLED HD display having a 1280×720 pixel resolution. It will be powered by 6-core Samsung Exynos 5 Hexa (5260) processor that is made up of two 1.7GHz Cortex-A15 cores and four 1.3GHz Cortex-A7 cores.

It will also have a quad-core ARM Mali-T624 GPU along with 2GB RAM. S5 Zoom will come with a 20.2 megapixel camera at the back having features like Optical Image Stabilisation (OIS), Xenon Flash, 10x optical zoom. The front camera will boast of 2.1 megapixel resolution.

It is expected that out of the box Android v4.4.2 (KitKat) will be the OS which will be complemented by Samsung’s very own TouchWiz skin. To store the space consuming images, a MicroSD card slot has been provided.

Until now though there has been no word from the Korean smartphone makers about the possibility of Galaxy S5 Zoom. Maybe they are biding their time to gauge public reaction to their S5 smartphone. If you are new to Zoom category smartphones you can go through our review of Galaxy S4 Zoom to get an idea of what to expect when S5 zoom hits the market.