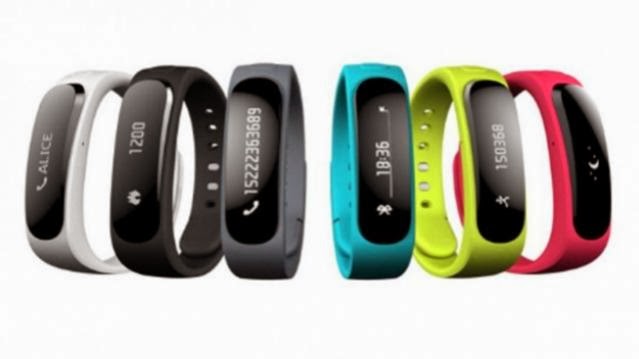 After the not-so-popular Galaxy Gear, manufacturers including Samsung are now shifting towards fitness-focussed smartwatches. Huawei has now announced a new Bluetooth sports band dubbed TalkBand B1.

The fitness band comes with a 1.4-inch OLED display and supports Bluetooth as well as NFC. What sets it apart is the removable earpiece that supports wireless calling. However, it also makes the band a little fat at 14.6mm. In a nutshell, it appears to be a Bluetooth headset–fitness tracker combination.

Besides, one can expect fitness features like pedometer that tracks its users’ steps and calories burned. The device is also capable of tracking sleeping patterns, something the iWatch is also rumored to support. Users can pair the device with phones using NFC, but it isn’t clear if it will support only Huawei devices.

Just ahead of its Unpacked 5 event at MWC 2014 Samsung has unveiled two new fitness-focussed smartwatches – Gear 2 and Gear 2 Neo. The wrist bands support a heart rate sensor, a pedometer and various tools to measure exercise, sleep and stress levels. The Gear 2 comes fitted with a 2MP camera while the Gear 2 neo has given the camera a miss. Besides, Apple is known to be working on the iWatch and rumours around Google’s smartwatch have also surfaced.

The B1 is expected to be launched in China next month, and is expected to priced at €99 that translates to Rs Rs 8,500. It is also slated to reach Japan soon; however the device will arrive in Middle Eastern nations and Western Europe only by Q2 2014.