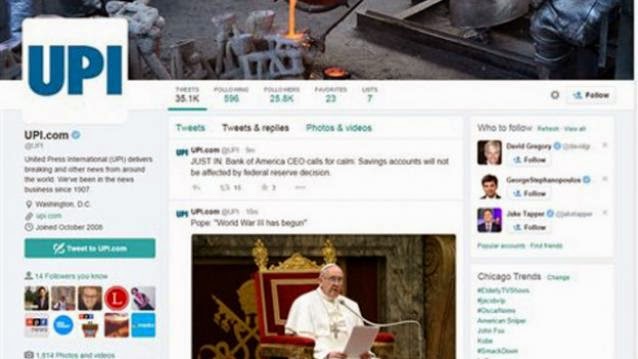 Tweets with false economic and military news were posted and then deleted.

One tweet on United Press International’s feed said that the Pope said World War III had begun. Another on the New York Post’s business section Twitter feed said that Bank of America’s CEO was calling for calm after a Federal Reserve decision.

The hack is being investigated, said Jenny Tartikoff, a spokeswoman for the Post. The New York newspaper is owned by News Corp.

It’s the latest hack of a high-profile social media account. The Twitter and YouTube accounts of the U.S. military’s Central Command were compromised earlier this week by hackers claiming to support the Islamic State militant group, and Crayola apologized for a hack of its Facebook page that filled it with sex jokes and other off-color content. During a 2013 hack, Burger King’s Twitter feed posted obscenities and put up McDonald’s logo as its profile picture.

More dangerous intrusions of companies and organizations are also on the rise. Just since fall 2013, hackers at Sony Pictures Entertainment, Target, Home Depot and JPMorgan Chase compromised those companies’ computer networks and gained access to confidential information about customers or employees. The hacks have exposed the lack of uniform practices for dealing with breaches.

The White House is pushing for new cyber-security legislation that increases the sharing of information between U.S. agencies and the private sector and protects businesses from lawsuits for revealing cyberthreats.