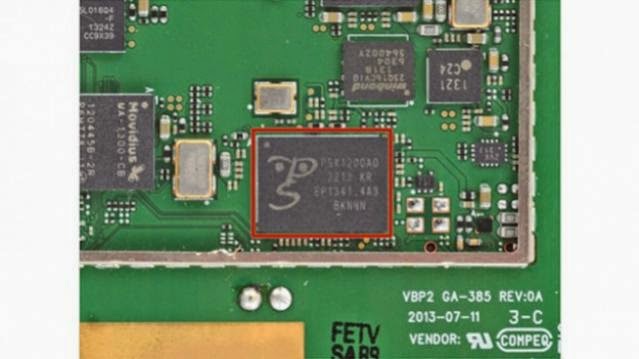 In February, we got a glimpse of Google’s Project Tango, a smartphone prototype that would allow users to 3D map the world around them.

While the 3D capabilities are known to be powered by Movidius Myriad 1 3D-sensing chip, a new report reveals that the device will also employ Apple’s PrimeSense Capri PS1200 3D imaging system-on-a-chip. It should be noted that Apple had acquired PrimeSense last year. The PrimeSense chip was discovered by teardown experts iFixit.

It states, “Just last year, Apple bought PrimeSense, manufacturer of Kinect’s 3D vision hardware. Speculators assumed we would be seeing this hot new hardware in an upcoming iOS device, with intent of mapping 3D spaces. Looks like Tango beat Apple to the punch with their own tech?”

So far, we’ve known that Google uses Movidius’ Myriad 1 vision processor platform for Project Tango. These sensors were considered very expensive and difficult to employ earlier. They are reportedly also known to drain the phone’s battery rapidly. However, the new generation vision processors consume significantly lesser power. This is one of the reasons, why Google finally went ahead with this project.

“Movidius has been getting plenty of time in the spotlight lately, as the ultra-low-power successor to PrimeSense’s 3D throne, finally a solution for mobile devices. So what’s PrimeSense doing here, alongside Movidius?” states iFixit.

While Google is using the technology for its 3D mapping-centric ‘Project Tango’, it also gives us a sneak peek into how Apple could possibly utilise the Primesense technology in the future. iFixit claims that the Project Tango works quite similar to the original Microsoft Kinect that has used technology developed by PrimeSense. “The algorithm cross-correlates groups of dots from the captured image of the projected dots with the pattern stored. Since the pattern is pseudo-random, each group of dots will have a unique fingerprint. Depth/distance is then calculated from the deviation in position of each dot in the sub-group related to its position in the stored pattern,” according to the  iFixit teardown.

Project Tango is an Android-based prototype phone and developer kit with advanced 3D sensors. With the sensors, the phone is capable of tracking motion, and can build a visual map of rooms using 3D scanning tech. Google wants to combine these 3D sensors with advanced computer vision techniques that will help fork out newer innovations for indoor navigation, AR games and so on.

Will Apple incorporate PrimeSense technology in the upcoming iPhone 6? While there is no word on that, it is highly speculated that motion control capabilities seen in Kinect are rumoured as upcoming to the next-gen Apple TV.