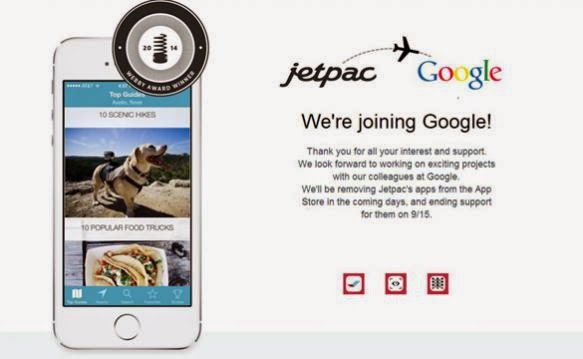 Google is buying JetPac, a startup that designs social travel apps according to the announcement on the firm’s website late last night. However, no financial details were disclosed for the deal.

“We’ll be removing Jetpac’s apps from the App Store in the coming days, and ending support for them on 9/15,” stated JetPac’s homepage.

San Francisco-based JetPac’s app uses pictures from various social networking sites to create city guides. The system provides contextual information through pictures. For example it could show you nearby places like say a karaoke bar with a big stage or a theatrical live-kitchen restaurant, based on pictures uploaded to social networks by users. So it’s basically taking the reviews concept and going beyond it with actual photographs and visual data.

Of course, your mileage may vary based on how specific your search is, but we can see it being employed within Google Now, if we have to speculate for specific use cases within Google’s products. Google already shows you nearby restaurants and photo spots in Google Now.

Secondly, Google+ lets users search for their photos using generic keywords like sunset and cat, which could be further expanded with JetPac’s technology.

Interestingly, the acquisition comes at a time when Google is stepping up travel-related features in Google Maps through Nearby Places as well as in the Niantic Labs (a Google company) app Field Trip, which saw Google Now integration for Android.